Scope of the Project

This is the second phase of the project. For the first phase we met in Paris at the Learning Planet Institute (LPI) GlobalLAMP-Paris to develop ideas and device prototypes and made first comparative measurements. In this second phase we are working on producing the devices in medium-scale and focus more on the applicability of the developed equipment in a real-world scenario. Two devices, the open source qLAMP - by Francisco Quero and the qPocketPCR by Urs Gaudenz at GaudiLabs were developed further to a near production ready level. We will now establish a production chain to build the first batch of devices and the necessary reaction mixes that later on will be used to test the system in the field. To get better insight into potential applications and the use in a real world scenario we gathered at MboaLab in Yaoundé, Cameroon to test systems and meet local experts from the field.

Different devices with varying technical features and advantages are developed and produced in parallel. The diversity of solutions allows us to compare and learn from each other while serving different needs, applications and markets.
openQLAMP 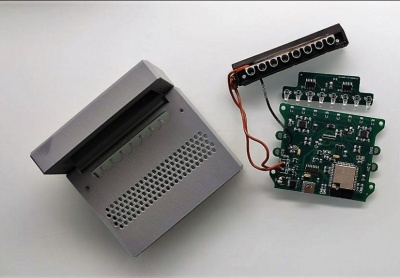 The openQLAMP machine was developed further with many important technical improvements such as flexible PCB heater with several heating sections and new SMD excitation LED board for efficient production. Also the software part was improved based on experiences from first tests (eg. pre-heating of the heated lid etc). 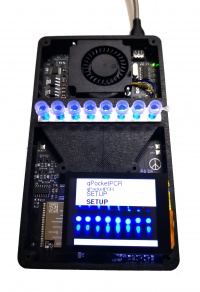 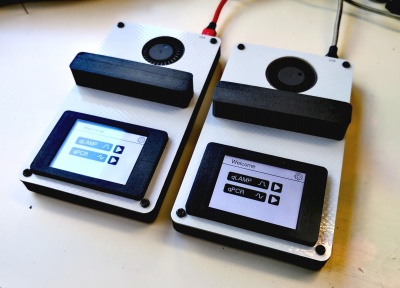 Motivated by the work in Paris and by the good results of the crude camera prototype Urs has worked hard at GaudiLabs to develop the idea into a new device called qPocketPCR. Based on the knowledge of the successful PocketPCR machine the new device reads a tiny camera through an ESP32 to read the fluorescence from all 8 tubes with a high sensitivity image taken from the side. The device then can show the real image of the fluorescent tubes on the LCD display and calculate the intensity for each tube. The device is very compact and can run from USB-C PD.

MboaLabis an open and collaborative space located in Yaoundé, Cameroon, with the goal of providing community and lifelong education and facilitate access to basic biotechnology and health care. During the preparation phase of the AfricaOSH gathering happening in Cameroon for 2022, Fran and Urs spent some time in the premises of MboaLab and continued the work on Open-Source Real-Time Amplification Hardware and their applications. 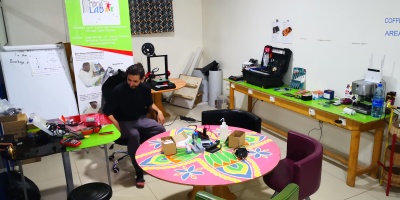 
During the residency we exchanged recent knowledge about the development of the devices, we got to know and started working with the researchers from MboLab and executives from Beneficial Bio, we visited local universities and met with representatives from the national laboratories and other organizations.

Collaborations with the Center D'Expertise De Diagnostic Biologique Du Cameroon CEDBCAM
We were lucky to witness the ceremonial event of Beneficial Bio, the commercial bio-tech part of MboaLab, and the CEDBCAM signing a contract on future collaboration in furthering local biotechnology production. After a visit to the local labs, representatives of both institutions gave presentations and expressed their visions of future collaborations. Dr. Raspail Carrel Founou led through the ceremony and also gave us the opportunity to present the GlobalLAMP project and the device prototypes. Our ambitions were highly welcomed and seen as important part in making biotechnology more accessible in the country. 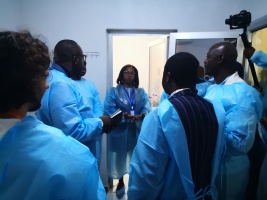 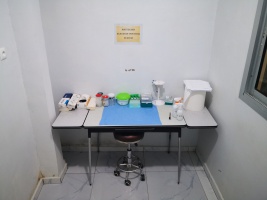 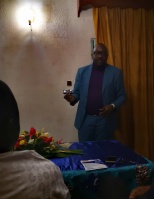 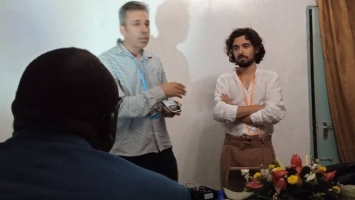 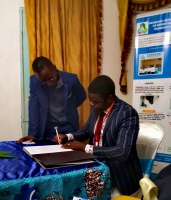 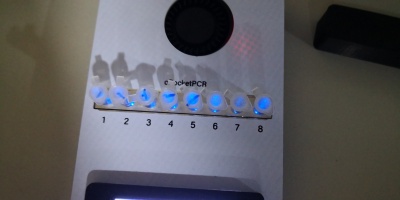 Running the qPocketPCR with LAMP reactions. We got some amplifications results :-) 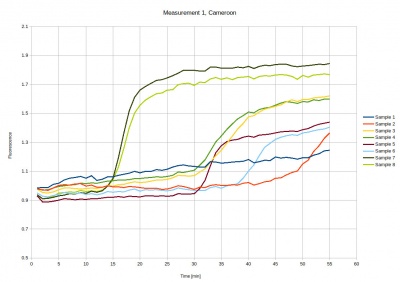 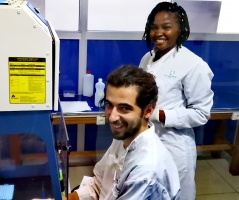 Preparing more reactions including samples from Beneficial Bio Cameroon.
First measurement with GMO detection primers. The signal was very weak even with an average amount of fluorescent dye. The liophlyized product looked wet and maybe the sealing was not good and the product degraded. Still there was some signal. 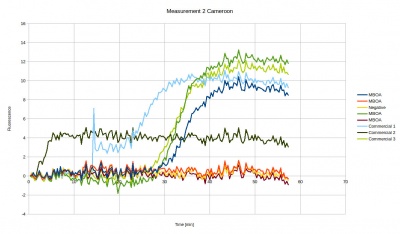 Next experiment comparing the LPI reactions with some reactions taken from the Beneficial Bio stock. Results are varied, not all products amplified. 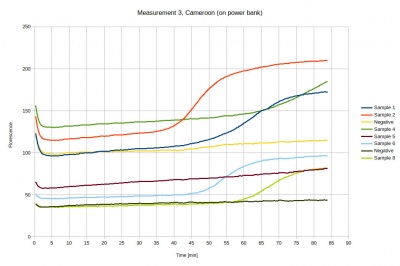 During a electrical power out we tested running the qPocketPCR from a USB power bank with promising results.

This time with a LPI sample with higher dye concentration. The signals are stronger.Still not very even over the different product. Maybe due to different degradation. Also the devices needs further testing and calibration of the detection system.