As our first real assignment we were asked to dream up a form of life that has no form. I chose to restrict myself to those formless lifeforms that had some practical value 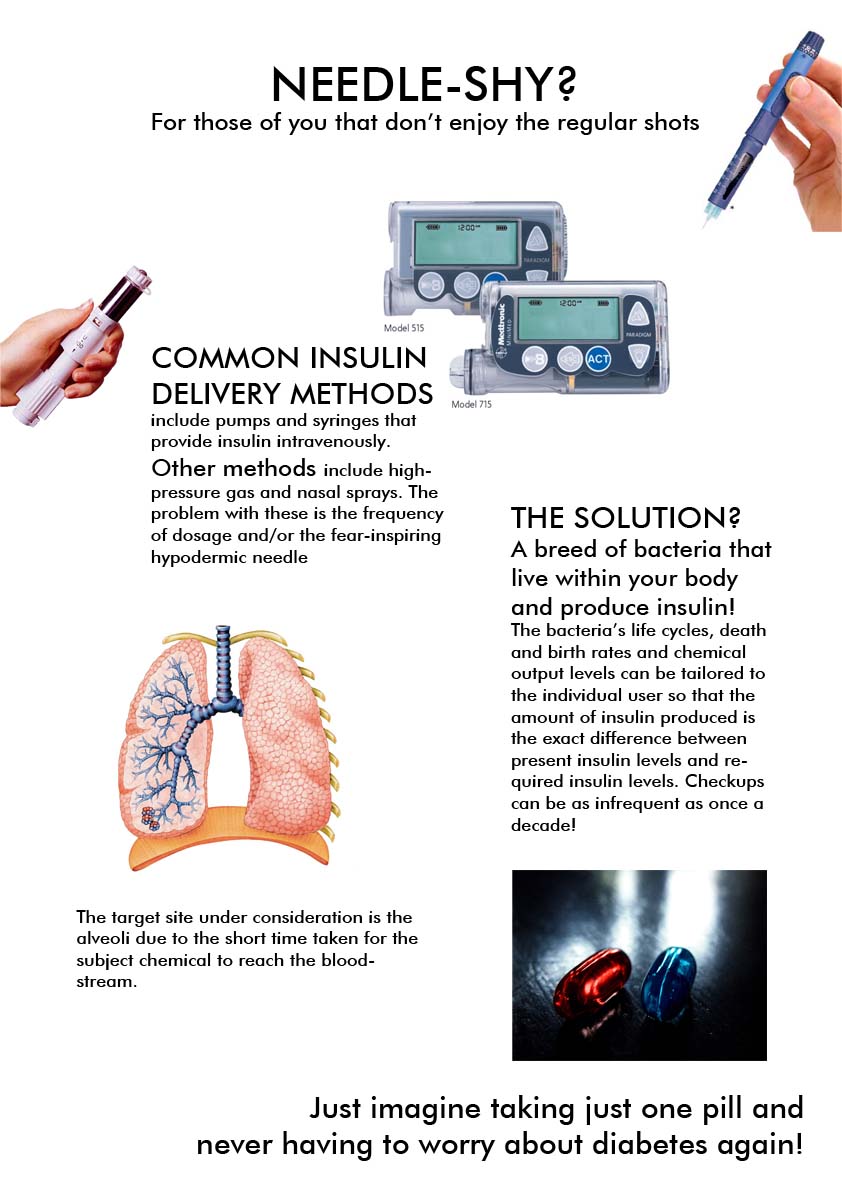 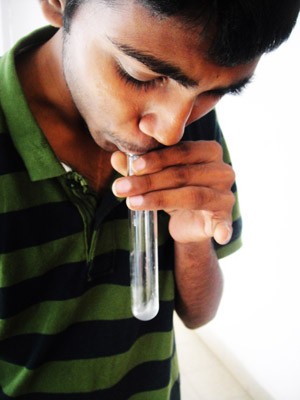 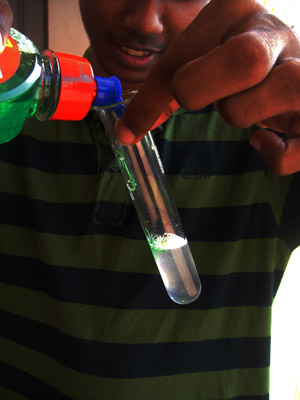 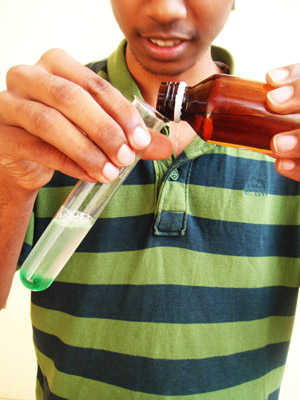 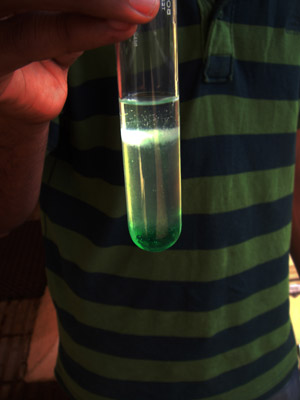 What I did with my DNA

Rituals are a large part of being human and spill into the scientific field as well. We took it a step further by coming up with our own rituals.

You know the old saying: “What Mary eats, Mary is”*? So I swallowed it. 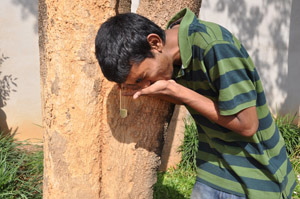 We began the long process of building our own lab today. Sure the equipment won't be the finest around, but we will know exactly what each device does and how each part functions. The group I am in is responsible for making a desiccator and a laminar airflow bench. We spent several minutes researching the devices and their functioning and several more figuring out how to emulate them. We will start building them next week. Also each group made a microscope from a webcam. This is how we made the microscope: [Link to come] This is how we made the housing for the microscope: [Link to come] The microscope has a magnification factor of slightly over 100.

We started the day by considering the following questions:

2. Do we have the right to modify living things?

3. What is design according to you?

And here are my answers:

1. Life™ is a board game. Just kidding. Actually, life is a journey. No, but seriously. The term life refers to anything that can reproduce its own kind and reacts to its environment in a way that favours this reproduction, but most importantly life is choice.

2. The only laws that restrict us are those of God, the ones that do not need reinforcement because they CANNOT be violated: what we have labeled as the laws of physics. If we are capable of doing it we have the right to do it. However, we also have our discretion.

3. To me design is combining aesthetics and function.

The rest of the day we spent documenting the construction of our microscope and planning out our bacteria cultures.

To grow bacteria we must provide them with a few things:

File:House.jpg A home For this we will use gelatin.

File:Food.jpg And food For this we will have several carbohydrates, proteins and fats

File:Bac and most importantly: The bacteria! I collected my sample from stagnant pond water 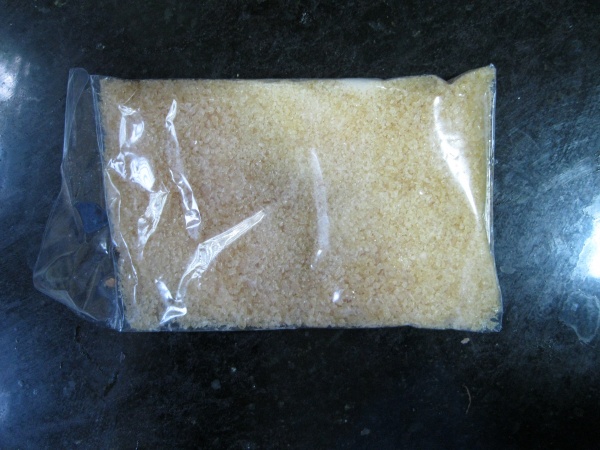 I prepared chicken broth and used some of the liquid as a substitute for water in the gelatin recipe. Finally I added a few ml of the pond water.

using biobricks from partsregistry.org to imagine a (useful) form of life

I am unsure on the exact mechanism, but I dare postulate that if e. coli could be coaxed into producing the enzymes mentioned below (with the help of the named biobricks) one could breed a layer of the bacteria on breath strips and then freeze them to put the bacteria in a state of cryostasis. The strips would then be refrigerated until they were in need at which time they would be placed in the user’s mouth (one strip should suffice per user per “situation”). The heat from the surroundings would trigger the bacteria back to their natant state. The bacteria would then secrete the enzymes that would in turn begin to convert the alcohol into aldehydes, which have fruity or nutty odours (as long as their concentration remains low). This would definitely be useful to those who like to drink but dislike the resulting smell of breath.

NOTE: I do not support inebriation. The proposed product is NOT intended to cheat breath analyzers.

The following were taken from partsregistry.org, which receives full credit for the information below and have my gratitude.

BBa_J107054 adhB inducible system (aTc) D: This part is an aTc -> alcohol dehydrogenase II inducible system. Alcohol dehydrogenase II enzyme (adhB gene, BBa_K173017) of Z. mobilis catalyzes the transformation of acetaldehyde into ethanol. This enzyme, as reported in literature, is also able to work in the opposite direction, oxidizing ethanol to acetaldehyde. The expression of adhB in this part is constitutive in commonly used E. coli strains, but the promoter becomes inducible when the tetR protein is overexpressed, such as in DH5alpha-Z1, W3110-Z1 or MG1655-Z1 strains. In these strains, the promoter can be induced with aTc molecule.

I saw the lab site for the first time today. After taking measurements I began working on the floorplan and discussing the building materials with my peers and mentors. We finally decided on an umbrella-cut tarpaulin covering over a dome-like metal framework as our main housing. File:Dome.jpg

Today we experimented with our microscopes and took a few pictures of fungal spores. Later we watched David Cronenberg's Shivers. It was an interesting movie but I will not discuss it here to avoid spoilers. However, I will say that the movie gave me plenty of ideas.

We started the day by going through the Cyborg Manifesto. If you are interested in reading it the link is here

Donna Haraway's Cyborg Manifesto coaxes the reader to reconsider stereotypes, assumptions and the true meaning of titular constructs like gender, divinity and organic.The writing style seemed poetic at first but I grew tiresome of her choice of words quickly. Although the manifesto made a few interesting points it was so overladen with unnecessarily esoteric terms that the read was more tedious than interesting. I spent far more time looking up Greek and Latin words than reading the actual article.

Next we watched a few lectures on high school genetics. The most interesting part to me was going over Koch's method of identifying causal agents in reference to diseases. Simple and elegant: the essence of scientific method.

A large portion of the day was spent in research. I have provided links to the most interesting topics below:

Quorem sensing - an intriguing method of communication in bacteria

Magnetoception - the ability to sense a magnetic field

We have finally started the most important part of the course: conceptualizing our final project. After hours of brainstorming we have come up with several interesting ideas but still have not settled on one.

Some of my own are:

Bacteria that can inject certain plasmids into other bacteria; the plasmids would code for the injection mechanism and another observable trait.. Such a mechanism could later be used to create "seed" bacteria that spread its traits exponentially. These traits could be something as simple as luminescence or the secretion of medically significant compounds. The only limit is our imagination. Further progression along these lines could someday result in bacterium capable of imparting their entire genome to another bacterium; essentially transforming the species of the latter: Zombie bacteria if you will.

Bacteria that can breakdown aldehydes (particularly ethanal) in one's bloodstream. This would be the ultimate hangover remedy. However, converting aldehydes into a less toxic component is a problem.

Bacteria that secrete ascorbic acid to facilitate the degradation of kidney stones. The trouble with this idea is getting the bacteria to the right place.

The workshop is closed so we have to postpone the building of our equipment and focus on research instead. An interesting paper by Dubey and Ben-Yehuda revealed a possible mechanism for the transfer of genetic material. The article describes nanotubular structures that form between bacteria growing on a solid-state medium. These tubules are used to facilitate the transfer of certain proteins and possible genetic material as well. Through the course of two sets of experiments, with the help of High Resolution - Scanning Electron Microscopy (HR-SEM), the nanotubeules were found to carry GFP and also possibly help transmit a temporary antibiotic resistance. It is interesting to enter into conjecture to further the Zombie bacteria idea using the nanotubular structures described in their paper. If you are interested in reading the paper it is available here:

More research. Today I read through most of Aswin Sai Narain Seshasa. His work on transcriptional mechanisms for the regulation of metabolism stands out. E. coli, the species that our team will be working on, was extensively studied, yielding some interesting data. Bacterial regulatory systems are organized into general and specific Transcription Factors (TFs) that are each responsible for certain or a range of metabolic processes. Seshasa's work deals with mapping these factors to their functions and determining their mechanisms. The details of the experiment can be found here:

A strain of e. coli that can be packed with frozen foods (in a partitioned compartment). The bacteria would be dormant when the package is refrigerated but on removal the bacteria "wakes up" and begins decomposing fuel (also present in same compartment; fuel is simple carbohydrate- rich substance). The decomposition is an exothermic process that cooks the food within minutes. Possibly, the exothermic process could be used to kill the bacteria and sterilize the compartment.

Develop a culture of e. coli that moves towards light and secretes pigments – potentially luminescent and of various colours – based on factors such as humidity, temperature and light intensity. The bacteria would be placed in the centre of a circular dish that provided the necessary nutrients and chemicals to manufacture said pigments. The dish would be surrounded by a ring of inward-facing light. The final product is expected to be concentric rings of colour that merge into each other. This is an indirect way of translating meteorological data into an aesthetic visual representation.