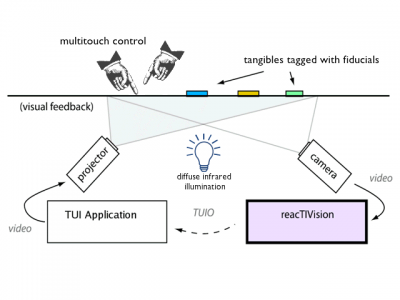 You should make sure that the camera has an acceptable lens and sensor size. For lowest latency and best performance we recommend firewire cameras from the top range, such as industrial cameras with a high framerate, resolution and sensor size. These cameras usually also come with high quality C-mount lenses. Cheaper firewire cameras, such as the unibrain fire-i also allow optional wide-angle lenses. From the large range of available USB cameras we recommend to use high end models with a native resolution of at least 640x480 at a frame rate of 30Hz. A very affordable and relatively good camera for this purpose is the Sony PS3eye, which is also working well under Windows, Linux and Mac OSX. DV cameras supporting full-frame mode are suitable, while those with interlaced mode only, will not work at all.

This application was designed to track specially designed fiducial markers. You will find the default "amoeba" fiducial set within the document "default.pdf" within the symbols folder. Print this document and attach the labels to any object you want to track. The default fiducial tracking engine is using Ross Bencina's fidtrack library which is basically a newer high-performance implementation of Enrico Costanza's d-touch concept. Alternatively you can use the "classic" or the "dtouch" sets. See below how to configure the application using these older symbol sets.

The application can alternatively send MIDI messages, which allows to map any object dimension (xpos, ypos, angle) to a MIDI control via an XML configuration file. Adding and removing objects can be mapped to simple note ON/OFF events. Keep in mind though that MIDI has less bandwidth and data resolution compared to Open Sound Contol, so the MIDI feature is meant as an convenient alternative in some cases, but TUIO still will be the primary messaging layer.

Adding <midi config="midi/demo.xml"/> to reacTIVision.xml switches to MIDI mode and specifies the MIDI configuration file that contains the mappings and MIDI device selection. An example configuration file "demo.xml" along with an example PD patch "demo.pd" can be found in the "midi" folder. You can list all available MIDI devices with the "-l midi" option.