This research-based project is dedicated to the development of an "estrogen hack lab" or ESTROFEM LAB -- a set of tools, protocols, and wetware for low-cost, accessible, participatory estrogen hacking + workshopology, necessitated by its genesis project, Open Source Estrogen (2015), the biopolitics of estrogen colonization and microperformativity. Regarded sometimes as hobo science, freak science, and public amateurism, the Estrofem Lab and its workshopologies aim to detect and extract estrogen from "sources with meaning," providing the contextual framework for why we hack estrogen, and why we perform science as citizens and (hack)activists. This ongoing artistic investigation has led to creation of yeast estrogen sensors (YES-HER yeast) containing human estrogen receptor for detection, vacuum pump solid phase extraction (SPE) using cigarette filters and smashed silica gel, and reverse phase column chromatography using broken glass bottles and methanol. I hope this website serves as a resource for others interested in the ongoing hormonal colonizations on our bodies and environments and wish to form their own micro-resistances - toxicity is never consensual! 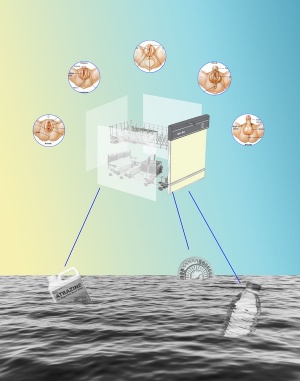 The project aims to hack the hormones present in our bodies and our present environment, creating a non-institutional portal for hormone access as well as a cultural dialogue for biopolitics. In response to the various ways hormones (such as estrogen) performs a molecular colonization on our bodies and ecosystems, how do we as affected persons effectively respond? Can we use civic action to create DIY/DIWO protocols and recipes for hacking estrogen that are founded in equity and accessibility? From detection to extraction to synthesis, these estrogen recipes function as social resistance, as consciousness-raising, as DIY therapy, as gender-hacking. Institutions and scientific fields produce fictions about how bodies should be gendered and how they should reproduce, perpetuating a standard of normalcy that is exclusionary and touting hormones as the biological determinant of sexual identities. Thus, present hormone therapies both pathologize bodies and at the same time prioritize access over others. However, hormones such as xenoestrogens exist with their own agency. They can be characterized as a form of slow violence because its mutagenizing effects are so gradual and difficult to perceive. On the other hand, endocrine disruption implies a perspective for what writer Heather Davis calls a "queering futurity." If we are living in an all-pervasive, anthropocentric toxicity, then this challenges society's prescribed notions of normalcy, of binary bodies. The project acknowledges our bodies as permeable, mutable entities that are becoming increasing alien, and proposes to use "the becoming" as an agent for resistance. DIY/DIWO biohacking can function as a tool for creating new entry points and subjectivities, combating traditional power structures responsible for the production of knowledge, of bodies, and of technoscience. From these xeno-forces arise xeno-solidarities, capable of collectively hacking the systems of hormonal control. 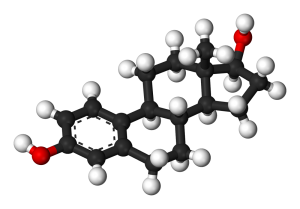 Estrogen is a molecule that is naturally produced in our bodies, and is responsible for the normal functioning of the body such as mood, metabolism, reproductive development. However due to dominant capitalist forces such as petrochemical, agricultural, and pharmaceutical industries, the planet is permeated with hormonal molecules, called Endocrine Disrupting Molecules (EDCs) or "xenoestrogens." Plasticizers, pesticides, hormone therapy pills, personal care products, casings for electronics and hardware are all common examples of products that contain molecules such as Bisphenol-A, phthalates, dioxins, PCBs, diethylstilbesterol, and hundreds (if not thousands) other residues of industrial capitalism that interfere with the hormonal functioning of our bodies and bodies of non-human species. Furthermore, these molecules have a tendency to accumulate in areas where the marginalized and impoverished live, often as a result of colonialism. The health effects range from morphological (hypospadia, male breast development) to neurological (depression, autism, lower IQ) to physiological (early onset puberty, ovarian cancer, worldwide sperm count drop). We are increasingly living in a world that we no longer know, one that is alien, one where sex could be decoupled from reproduction, where plastic is our progeny, where our sex and gender is also industrially modulated. 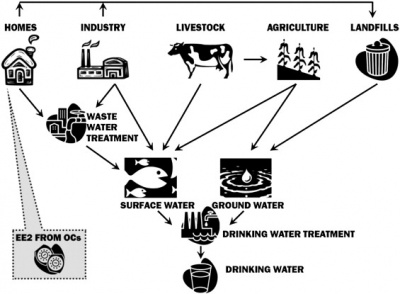 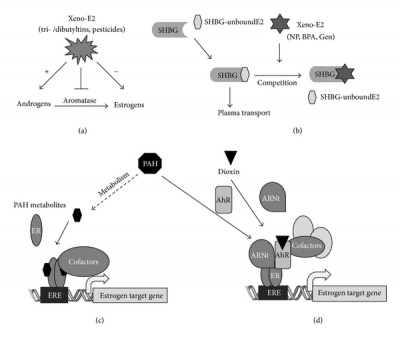 (notice the similarity between the two diagrams...)

WHAT'S HAPPENING @ THE MACRO LEVEL? The above (left) shows points of entry of endocrine-disrupting compounds into the water supply. While EE2 (Ethinyl estradiol, estrogen derivative found in oral contraceptives) is more chemically potent than other estrogenic compounds, the amount of EE2 consumed by women using oral contraceptive is significantly less than the other sources described above. As an example, the volume of veterinary estrogens given to livestock each year in the US is five times the volume of EE2 consumed by women who use hormonal birth control methods.

WHAT'S HAPPENING @ THE MOLECULAR LEVEL? The above (right) shows examples of interaction between xenoestrogens and estrogen signaling pathways. Some xenoestrogens, such as tributyltins, can inhibit aromatase, the enzyme responsible for the conversion of androgens in estrogens, resulting in the perturbation of the androgen/estrogen balance. Other groups of compounds can interfere with estrogenic signaling by competing with natural estrogens for binding to sex hormone binding globulin (SHBG), resulting in defects in E2 plasma transport.

RESEARCH + WORKSHOPOLOGY + FREAK SCIENCE ON the MICROCOLONIZATION OF HORMONAL MOLECULES 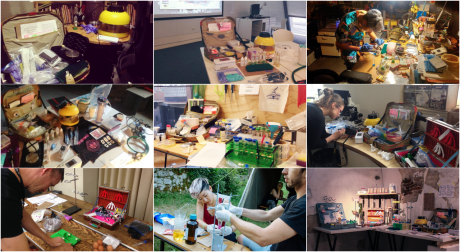 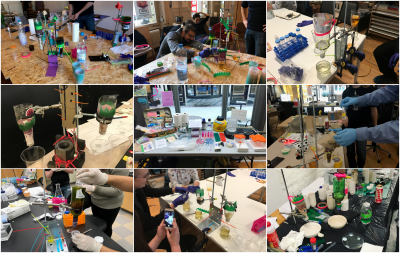 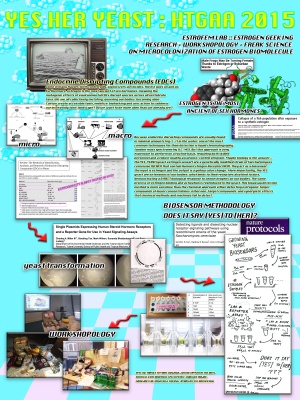 Named “YES-HER: Yeast Estrogen Sensors with Human Estrogen Receptor,” they are extensions of our bodies; if they react to xenoestrogens and change color, that means the same molecules are affecting our bodies and any other species that has the same estrogen receptor. There is little we know about the evolutionary history of the estrogen receptor - only that it is the same receptor across almost all vertebrate species. This promotes the idea that humans are “becoming with” other organisms in our shared toxic environments, referring back to our collective mutagenesis and shared species vulnerability. These strains of yeast already exist but have been patented by biotechnology corporations and are sold at thousands of dollars per kit.

Below left is an image of the plasmid inside recombinant yeast (you can purchase one from Addgene repository for $65 and start your yeast assays) accompanied by this paper from Tulane University (2009). The plasmid encodes Human Estrogen Receptor (HER). Upon exposure to estrogen, the cell begins to produce an enzyme called beta-galactosidase (part of the LacZ expression system) which creates yellow nitrophenol product when you add ONPG substrate along with the estrogen sample. The YES-yeast then have to be lysed (killed!) to see the yellow color. 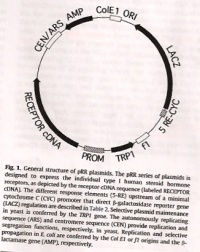 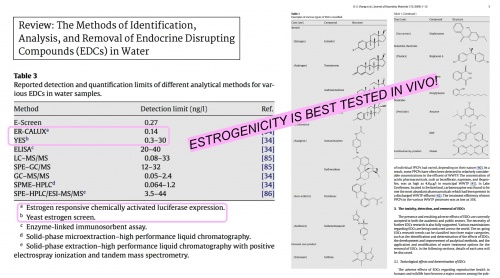 ***this is (so far) the most feasible method for low-cost, diy estrogen detection!!

COOL LET'S DO IT

THE ADDGENE PLASMID ARRIVES IN AN AGAR STAB OF AMP-RESISTANT ECOLI. GROW UP OVERNIGHT IN LIQUID CULTURE (LB SPIKED WITH AMP), THEN RUN DNA PURIFICATION USING OMEGA BIO-TEK DNA MINI PREP, SPIN PROTOCOL. USING NANODROP, PLASMID CONCENTRATION WAS ASSESSED TO BE AROUND 80-100ng/ul WITH LITTLE TO NO PROTEIN CONTAMINATION BASED ON 260/280 RATIO.

THE YEAST STRAIN USED WAS W303a OF S. cerevisiae. THREE TRANSFORMATIONS (YT) WERE MADE: 1) YT IN 40MIN HEAT SHOCK 2) YT IN 20 HEAT SHOCK 3) CONTROL (NO DNA). 1uL OF PLASMID WAS USED TO TRANSFORM 3mL OF YEAST CELL CULTURE AND INCUBATED AT 30C FOR 3 DAYS. ALTHOUGH THERE WAS CONTAMINATION IN YT40 AND CONTROL, NO YEAST WERE PRESENT IN THE CONTROL. 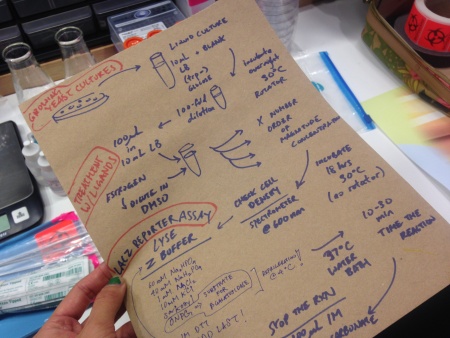 STEP #3: ESTROGEN BIOSENSING :: DOES IT SAY [YES] TO [HER]? SUPER IMPORTANT TO REFERENCE THIS NATURE PROTOCOL, but I will try to summarize here.

DAY ONE: take a transformed yeast colony and make a liquid culture with 10mL SC(-)TRP (This is the selective media containing no tryptophan. The transformed yeast should survive without trp, other strains cannot). Incubate overnight @30C with tube shaking. RIGHT: DIY TUBE SHAKER BY DAN CHEN. IT FITS IN THE MAGICFLY CHICKEN EGG INCUBATOR $73 ON AMAZON. This is especially nice for compact traveling.

DAY TWO: Make a 100-fold dilution of your overnight culture by taking 50uL and diluting in 5mL of SC(-)TRP. To test the transformed yeast for estrogen detection, you should work with KNOWN amounts of estrogen. I purchased some Estradiol from Sigma Aldrich to make a 100mM estrogen stock that I will use for dilutions. Put 1uL of each estrogen dilution into 100uL of overnight yeast culture. Incubate overnight 18hrs @30C. No need to rotate. 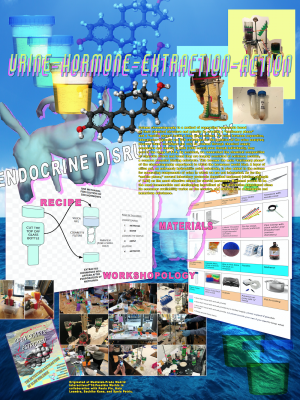 Column chromatography is a method of separating compounds based on their chemical structure and polarity by creating a “stationary phase” and a “mobile phase” inside a long glass column. For urine hormone separation, laboratories typically use C18 cartridges for the isolation of the urine analytes; however these cartridges can only be ordered through chemical supply companies and usually in bulk (>200 count) even though individually, they cost in the range of $1-4. By accident, we researched the chemical composition of cigarette filters and found they are largely consisted of cellulose acetate, a common nonpolar binding substrate. This became the main “stationary phase” of the chromatography experiment to which the hormones would bind. A layer of silica gel, an extremely hydrophilic polar substrate, is also added to the column for separating components of urine in which we are not interested. As for the “mobile phase,” several laboratory protocols described methanol (elution strength ε° 0.95) as the most effective eluent for steroid hormones. Methanol proved to be the most inaccessible and challenging ingredient of this extraction experiment since its consumer availability varies on the country, and because it is a flammable and hazardous substance. 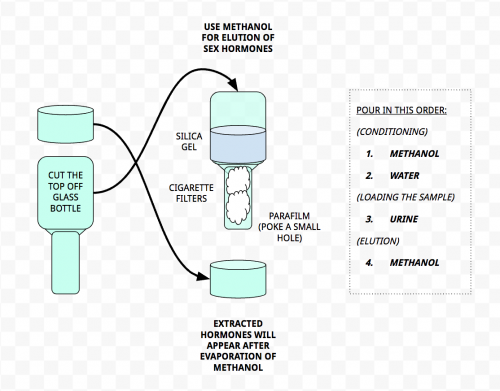 As for the hardware component of the experiment, typical laboratory columns can run in the range of $200-600. At the Interactivos residency, we decided instead to use recycled glass bottles and cut the bottoms off. The column stand for holding the glass bottles was prototyped at an event later after Interactivos residency called PIFcamp: Alpine Hacktivation in Soca Valley, Slovenia, a mountainous region of lush forests and glacial river water. The limited hardware availability in this setting prompted the use of shelf brackets, metal rods, and zip ties for the fabrication of a column chromatography lab setup for under $10. 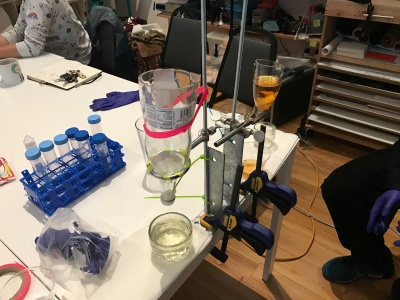 Once the column has been constructed, the experiment proceeds with four main steps:

The methanol is then evaporated off using a hot water bath and an air pump. This typically requires one or two hours to fully evaporate, leaving behind a brown sticky substance which is a collection of all steroid-like molecules. To isolate only estrogen is beyond the scope of this protocol. 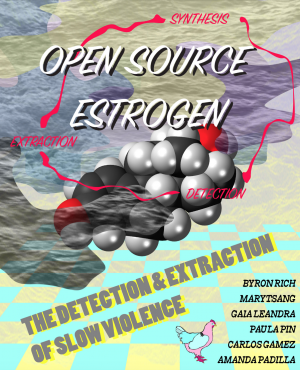 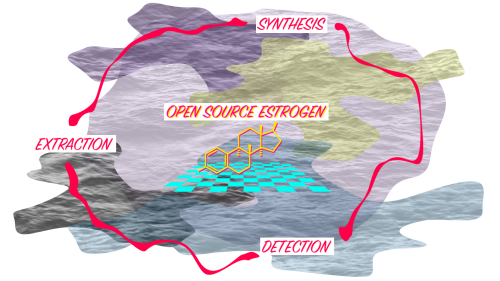 The goal of Open Source Estrogen is to explore the various ways that estrogen performs molecular colonization of human society, our bodies, and ecosystems. Estrogen is the most ancient of sex hormones. Therefore the mutagenic effects of environmental estrogens disrupt species across all animal taxa, including humans. In response to the ongoing molecular colonization of xeno-estrogens, the project aims to demonstrate how our collective mutagenesis necessitates civil action through DIY/DIWO practice. Three possible approaches are: 1) SYNTHESIS - Are we able to circumvent governments and institutions to gain hormone access? What are the ethics behind self-administering self-synthesized hormones? 2) DETECTION - What are the ramifications of estrogen de-regulation? How can biosensors play a role in mobilizing citizen surveying of local water sources? 3) EXTRACTION - How can citizens remove the hormonal toxicity in the environment that is currently mutagenizing human and non-human bodies? Can the xenoestrogens be recycled back into our bodies? We are looking for collaborators across ALL disciplines: biochemical knowledge for extraction, biotoxicology, cross-species endocrinology, ecological interactions, analysis of biological samples from local water sources, building of low-cost biosensors for detecting and mapping estrogenic waters -- these are a couple of examples.

BIRDS OF ESTROGENIC PARADISE Can chickens absorb estrogen from the environment and deposit in their eggs? Let's research it!