Difference between revisions of "Manasa Thimmiya" 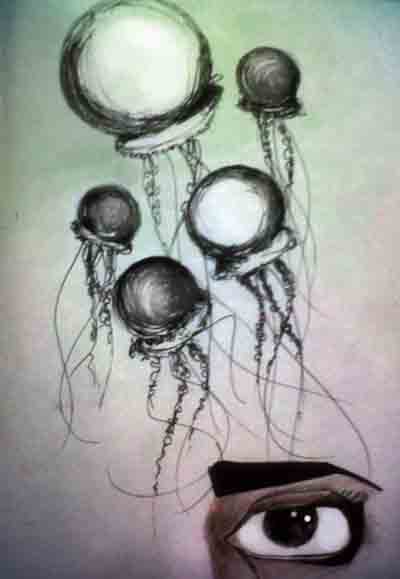 If i've ever had a reason to stay out of school it would be because of the same old monotonous classes i'd have to attend. Well I've had my share of running away. Now it's time to stay. I've always liked biology, chemistry and math maybe even a little more than arts. For the past one year I have been an art student at Srishti, I like it, a lot. But, there seems to be something missing, it feels incomplete. Maybe it was the fact that I didn't get the chance to go ahead with the "sciences". Then came this opportunity of doing something different. Synthetic biology. We read up about synthetic biology, DNA, genes, protiens and at that point I realized that all I learnt at school wasn't all that useless. Everything was coming back to me. We were told that we had to work on E-coli. My research for that day had to revolve around it. My day ended with brainstorming and coming up with new ideas. In what way could we modify an organism to do something? That, being the question of the day. At the end I came up with the idea of cloth regenerating bacteria. My other idea was to work a body to function like a thermostat in order to adjust to the environment.

The excitement hasn't gone down. Everyone was talking about how we're back to research and taking down notes. True. Our second day started with sharing our ideas and it was exciting. Some ideas were really nice and got me thinking. So I researched some more, this time it started of with aquatic life and moved from jelly fish to aerosols to nano technology. Anything seemed to interest me. I was no longer happy with the cloth regeneration idea. It was time for a new idea. The first task of the day was to familiarize ourselves with BIOBRICKS. It was really nice. It's almost like everything is programmed, like in a computer. The next thing we did was extracting our DNA. Well it was nice that i got to 'see' my DNA. The entire process ended with a ritualistic disposal of our DNA. I chose to drain it out on rocks. It excited me how something that represented life dissappeared among something lifeless, showing that life might not even be as important as we percieve it to be. Maybe it's just like how the earth might be once the "world ends", nothing will remain but lifeless matter.

A lot of reading, a long way to go. We were told about the lab today. It was pretty exciting for us to see that we would be doing some "hands on" work. My excitement dropped when i had to research all day. But, nothing goes to waste, does it? We made a list of all the equipment that we would be needing for out DIY lab. Then we split into groups and picked equipment that we'd want to work on. Madhul and i picked the incubator. The first thing i thought of was the incubators in hospitals for babies. Well a temperature regulated case, how hard could it be? We made illustrations designing the equipment. The later part of today i saw something really neat, a webcam microscope. All we had to do was open it up, flip the lens and fit it back in. Now we have a pretty cool microscope and we can click images, freezing them in frames. But we had one issue, the microscope was not stable. Considering that is the most important feature of the microscope we had to come up with a structure that would make it stable providing it ample light. I had a picture in my head and i drew it out. Then we looked at what others did. I thought it was best for me to combine my idea with others. The final design was to fit the microscope on an adjustable top. Finally to attach that structure to a firm base to maintain stability. The light seemed to be a bit of an issue. We thought of placing it around the webcam. This caused the light to form shadows and the light was thwarted away by the webcam, so it didnt work. We went back home with the goal of coming up with a better idea for the next day.

Some questions that we were asked to think about. What is life according to you?

Do you think you have the right to modify a living being?

Honestly, I feel it is unfair in whatever way possible. Things are made in a specific way because they are meant to be. Messing with the purity of something is just playing with nature. You never know the same modifications can become a bane sometime later. However sometimes these modifications are permissible because the ‘being’ may require it. Or promotes wellbeing of many in general.

What is ‘design’ according to you?

Anything that involves changing anything into a different form is design. When I look at something to be more helpful in an easier way so much so that it is also appealing to my eyes and to everyone else, it becomes good design. So modification in anything to suit a purpose in a particular way is design.

I do kind of see the point of doing this exercise. It is necessary to know till where we can push ourselves. After this I feel comfortable working with whatever it is that we plan to do for the next few months.

It was the weekend. We were again back in groups. Madhul and i decided to harvest bacteria together, different ones. I didn't wan't to do one of those 'been there done that' ideas. We looked at everything and thought of bacteria and if it could produce enough. My eyes were fixed on my pet turtles, so i took swabs of the back of the turtle shell. I made chicken broth and mixed it in with gelatin and sugar for it to act like agar and harden a bit. Agar is basically nutrition or the food that the bacteria feeds on to grow. I then put wiped the swab on it in a zig zag pattern. My worry all through was what if it doesn't work? What if i went wrong somewhere? But i left it all to time. So i covered it and went to bed just hoping that i'd have something to show in class the next day.

I woke up excited. I ran up to where i put the bacteria and looked inside. There it was. Something i created, life, in some form atleast. Yes, i was quite proud of what i did.It was really nice, seeing life grow in the matter of a few minutes. It all seems so easy and yet so complex. I was intrigued by how the bacteria grew, i read up about turtle bacteria and discovered that even dogs are safer to touch.

Today was movie day. We finally watched the movie that we were supposed to for a really long time, well not really. GATTACA. It answered the questions we were asked to answer a few days ago. It spoke about so much and mainly showed me how when someone really wants something it wouldn't take anything to stop them to an extent that he or she might defy death or something that was predetermined. The later half of the day we had to come up with our own bacteria. We were asked to use www.partsregistry.org to make the biobrick. I came up with two ideas: 1) Bacteria that regenerates cloth 2) Bacteria that could make an organism into a living thermostat.