Difference between revisions of "HLab14-Book" 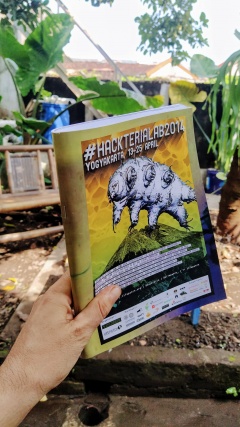 HackteriaLab is an intensive two-week transdisciplinary collaboration between international and local artists, hackers, activists, scientists, and designers, focusing on a series of events, workshops, residencies and exhibitions. In April 2014, the third edition of HackteriaLab was held in Yogyakarta, Indonesia.

Something about why it was published so late?

During the pre-phase of HackteriaLab 2014 - Yogyakarta "Tourdigrade" connected to the regional partners, going on tour for a series of workshops, hackathons and presentations. On the roadmap were our partners in Surabaya, W.A.F.T. Lab, the Ruangrupa community in Jakarta, and friends in our networks in Tobucil, Bandung and Jatiwangi Art Factory.

THAT TWO WEEKS IN YOGYAKARTA

Citizen science has long contributed to the health of local communities by making people aware of their environment in the form of oral histories and traditional wisdom. Recently, international open source and maker movements have been actively engaging with the life sciences to focus on the environment. This brought a revival of the tradional knowledge as well as an opportunity for innovation and amodel for public participation in sceince. These activities are becoming influential policy forces changing how we produce and share knowledge as an iterative and collective process. Yogyakarta, Indonesia, has been one of the most active hubs in this movement.

Three different environmental nodes were the main framework of HackteriaLab 2014 - Yogyakarta, which were Merapi mountain, Kali Code river and Wonosadi forest. The reason of this selection was also due to the fact that we had three collectives, which had already been working on those locations; Microbiology UGM was working on the soil remediation of Merapi mountain after it's volcanic eruption in 2010; Lifepatch has been working on the mapping of Kali Code river in the city; Greentech Community has was active on biodiversity conservation of Wonosadi forest. 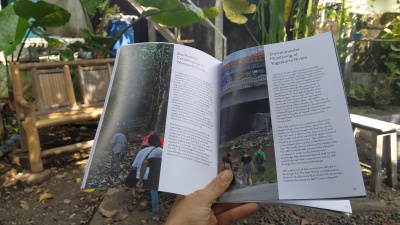 As the main working space for all of the nodes, we converted Kedai Kebun Forum (KKF) space in to a working lab for everyone. We tried our best to arrange the lab by the area category such as biology, hardware, woodworking, cooking, and even a hangout area. In the end chaos take over and somehow everyone manages to get their own lab to work in that space.

The symposium was held at Universitas Gadjah Mada (UGM), with a mixture of selected presentations from the organizers, our collaborators, and several representatives of the Indonesian and international participants. The presentation were live-interpreted in both English and Indonesian language.

The final work presentation was held Langgeng Art Foundation (LAF) gallery just a few hundreds of meters down the street from KKF. We encouraged collaborations between the participants to present it in a form of an exhibition. Again, even if it was framed on the three environmental nodes, many of the presentations were not related to them specifically. 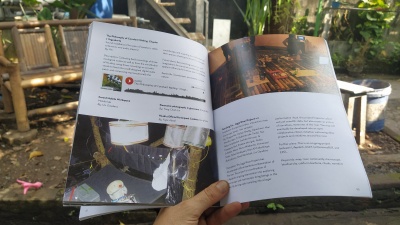 Full documentation is available on the hackteria wiki.

Produced and directed by X-Code films, a documentary film was made during the two weeks of HackteriaLab 2014 – Yogyakarta. It offers you a glimpse of (almost) everything that happens and documents the participants wish list for future collaborations and works.