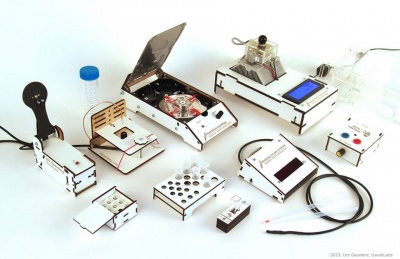 Overview of some of our lab tools made using digital manufacturing tools, by GaudiLabs

To start up an independent and open lab it is crucial to get affordable lab equipment (besides having an enthusiastic and open group of people). Most of the tools we use are do it your self (DIY) and open source and are built from widely available and recycled parts found in consumer products such as DVD drives, hard disks and pc fans. Building the specific devices further helps to understand the basic principles behind and learn more about the technologies and methods used. The discussions among scientists and engineers in the process of rethinking the devices to make them more accessible are very fruitful and often lead to new and innovative designs. - Urs Gaudenz

Beyond Black Boxes: Bringing Transparency and Aesthetics Back to Scientific Investigation, Resnick, et al, Journal of the Learning Sciences, 2000

Syntheses of "Beyond Black Boxes" put together by dusjagr and discussions with all of you.

This guide details the development of the free and open-source hardware revolution and provides you with step-by-step instructions on building your own laboratory hardware.

"Making a Laboratory is both a spontaneous activity and a slow labor of love."

A Lab is a place to labor (not only of love), experiment, research and share - there is no labor, experiment, research or sharing without the people. A Lab is not a museum for journalists, but a place made by a person for other people Start a small Lab , put it in a box, suitcase, backpack, picnic basket and take it with you. A Mobile Lab it actually allows you to go to people, and not wait for the others to come.

This book brings contributions by researchers from different areas and a wide range of countries, including Brazil, who have a significant role and reflection in the field of open and collaborative science.

The topic of open science is gaining ground not only within institutional environments for science, technology and innovation, but also in other contexts that, until now, were kept apart from these activities. As a result, it is mobilising other social groups as interlocutors of scientific practices. In turn, the resulting transformations in the relations between science, technology and society integrate the new dynamics of production and circulation of knowledge as well as the new role played by these dynamics in contemporary processes of social participation and change.

It is hoped that this publication will provide an overview of topics and issues that both trace and permeate the topic of open science nowadays from different perspectives and points of view. Above all, it is hoped that it might instigate further reflection and foster new ways of producing and circulating knowledge. Thus, it is geared not only towards the academic world, but also to abroader range of social actors that concern themselves with the democratisation of knowledge and information. The book is inspired by the results of the discussions held during the International Seminar “Open Science, Open Questions” that took place in Rio de Janeiro in 2014.

The Seminar was organised by: the Brazilian Institute for Information in Science and Technology (IBICT), Open Knowledge Brasil (OKBr), the Federal University of the State of Rio de Janeiro (Unirio) and the Interdisciplinary Laboratory for the Study of Information and Knowledge (Liinc). We would like to thank Ibict, Unirio, the Brazilian Center for

The Do-It-Youself biology (DIYbio) movement originated in the U.S. in approximately 2009 around student iGEM synthetic biology competitions as well as parallel open biology efforts in Europe and Asia with their connections to bioart and critical science practices in the late 1990s. This movement merged in recent years with other movements coming from professional scientists advocating eScience, Open Science, Open Access and Open Data. The calls for changing the publishing model and opening the datasets while supporting online collaboration and crowdsourcing are starting to merge with attempts to reduce the cost of experimental research and increase reproducibility by building low cost customizable laboratory equipment.

Biotechnology for All / DIY in bioanalytics: doing and grasping it yourself. SATW publication 2015

SATW Info 2/15 – Biotechnology for all / DIY in bioanalytics: doing and grasping it yourself. More info here.

«Do it yourself» in der Bioanalytik – für Deutsch siehe hier, français ici.

The article from SATW Info 2/15 – Biotechnology for all / DIY in bioanalytics: doing and grasping it yourself is available for download in German, English and French. The pedagogic conecpt and educational kits were developed during a project funded by the Swiss Academy for Engineering Sciences (SATW), together with hackteria, M. Dusseiller and U. Gaudenz, and FHNW School for Lifesciences, Dr. D. Gygax, during a workshop with an interdisciplinary group of participants.

"Biotechnological research is no longer limited to specialist laboratories: a growing community of biologists, amateur enthusiasts and technophiles is experimenting in kitchens, workshops and DIY laboratories. Some people view the democratisation of biotechnology as a threat, others as an opportunity to gain a better understanding of complex scientific interrelationships within society."

Various from the resources of Arvind Gupta

Do It Yourself Lab Equipment

The polymerase chain reaction (PCR) is a technique used to replicate specific pieces of DNA millions of times, which permits the detection and analysis of minute amounts of nucleic acids. Since its introduction in the late 1980s, this technique has been applied not only in molecular biology research but also in fields as diverse as anthropology, phylogeny, and forensics. However, despite the large impact of PCR, many of its applications remain within the confines of research and the academic environment. Now, in A Low-Cost Approach to PCR: Appropriate Transfer of Biomolecular Techniques, Dr. Eva Harris makes this elegantly simple technique more accessible to researchers, physicians, and laboratory workers throughout the world. She provides a description of the theoretical basis of the technique, the practical details of the method, and the philosophy behind the technology transfer program that she developed over the last ten years.

Raymond E. Barrett's Build-It-Yourself Science Laboratory took on an audacious task: to show readers how to build a complete working science lab (starting with a workbench) for chemistry, biology, and physics--and how to perform experiments with those tools. The experiments in this book may appear fearless and bold by today's standards, but many from previous generations fondly remember how we as a society used to approach scientific learning. Updated for today's world with annotations and sourcing notes by Windell Oskay of Evil Mad Scientist Laboratories, prepare to read (and use) this classic to reinvigorate scientific exploration at school and at home.

Links to other pages

Most experimental research projects are executed with a combination of purchased hardware equipment, which may be modified in the laboratory and custom single-built equipment fabricated inhouse. However, the computer software that helps design and execute experiments and analyze data has an additional source: It can also be free and open-source software (FOSS). FOSS has the advantage that the code is openly available for modification and is also often free of charge. In the past, customizing software has been much easier than custom-building equipment, which often can be quite costly because fabrication requires the skills of machinists, glassblowers, technicians, or outside suppliers. However, the open-source paradigm is now enabling creation of open-source scientific hardware by combining 3D printing with open-source microcontrollersW running on FOSS. These developments are illustrated below by several examples of equipment fabrication that can better meet particular specifications at substantially lower overall costs.

The age of personal biotechnology is upon us! Engineers have turned biology in a design discipline and it's now up to us to shape it's applications. After completing the BioHack Academy you can grow your own fuel, food, filaments, farmaceuticals, fragances, fungi and much more funky bio stuff at home. We'll teach you how to join the bio revolution and build your own biofactory using a Fablab, Maker/Hackspace or other shared machine shop.

Learn how to design, grow and extract your own biomaterials using only Open Source hardware you fabricate yourself. Whether it's a new type of bio ink, bio polymer or bio fuel, we'll show you can grow it yourself and share the results with others.

The Open Source movement revolutionized the way computer systems were developed and how companies made their businesses. Its philosophy requires that all source code should be freely shared, so that as many people as possible can use, change, learn, and improve upon it. In recent years the increasing availability and low costs of electronic components, processors and 3D printers meant that an open model of development has taken root also in the world of hardware, including the development of scientific lab equipment. The implications for research can hardly be overstated: “Open Labware” designs are almost always cheaper than “closed source” ones, allow for distributed development and, critically, customization by the end user, the lab scientist. PLOS welcomes submissions in this field.

The introduction of affordable, consumer-oriented 3-D printers is a milestone in the current “maker movement,” which has been heralded as the next industrial revolution. Combined with free and open sharing of detailed design blueprints and accessible development tools, rapid prototypes of complex products can now be assembled in one’s own garage—a game-changer reminiscent of the early days of personal computing.

It therefore comes as no surprise that more and more researchers are beginning to integrate the possibilities offered by 3-D printing and off-the-shelf electronics into their own lab routines, be it to modify existing equipment or to build new tools from scratch. The results are typically published under an Open Source licence in online repositories such as thingiverse, instructables or Hack-a-day. More mature projects are often also submitted for publication in international peer reviewed open access outlets such as PLoS, Frontiers, eLife or Nature Communications.

The goal of the Open Science Tools project is to design and mass-produce ​open and low-cost laboratory equipment for schools, laboratories, DIY-Bio community, industry, Citizen Scientists, and everybody else. We try to do this without compromising on performance, by taking unconventional approaches, concentrating on just major use-cases for a given device, and staying true to our goal.

We operate as part of the Open Science School in cooperation with ​L'OpenLab, both part of the ​Center for Research and Interdisciplinarity in Paris. We welcome everybody to participate!

It's in chinese... very active facebook group from Taiwan.

With the use of recycled and second-hand items I hope that individuals and teachers will use this blog to bring back the joys of doing science. Warning - I am not responsible for any damage or injuries obtained while using any information from this blog. This is for information purposes only.