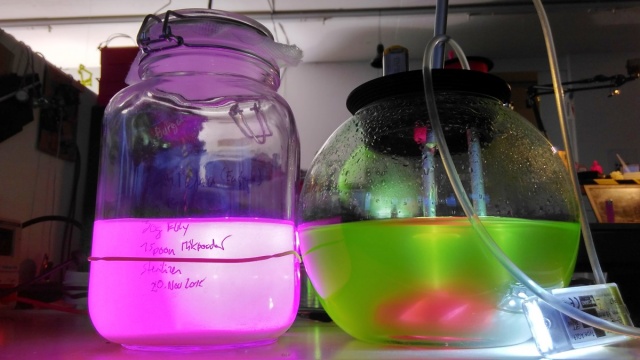 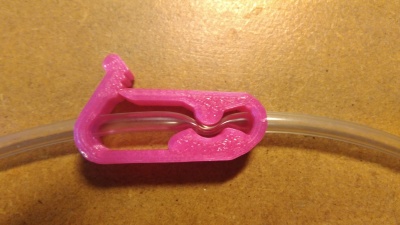 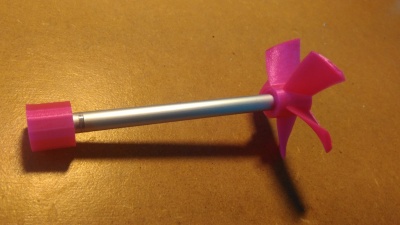 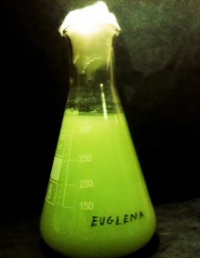 It should take about 1 week or so for the medium to turn nice green color..(picture in attachment)

I have have found out online that Euglena is great food for Daphnia, so I have just finished growing a nice batch of it, and will try to use it on Daphnia.

so this is also connected to the Daphniaology and the DDDP, Distributed Daphnia Domestication Program

The Green Menace! by Humphry Axelbearing

The other day I was slaving away in the fish room when a bottle fell from the shelf above my worktable. As it hit the table, the cap was propelled across the room like a cannonball. So much green liquid gushed out that I was reminded a certain memorable scene from "The Exorcist". When I snapped back to reality (well my reality, anyway) I realized that it was only green water, although the possibility still exists that it had been pushed off the shelf by some malevolent spirit. I suffered only minor damage from the incident - the green stain on my T-shirt will eventually wash out! I took the accident as a sign from (insert the name of whatever higher power you believe in here) that I should write this months column about the care and feeding of euglena!

The water I referred to above was green because it is home to millions of uni-cellular flagellates of the genus euglena. These organisms once gave taxonomists a big pain in the (insert your favorite body part here) because it was not clear whether they were plant or animal. They were green because they contain chlorophyll and are capable of photosynthesis (a distinctly plant-like trait). Yet they swam around freely and seemed capable of filter-feeding as well, which suggested they were "animal" rather than "vegetable". As it turns out the controversy was resolved by declaring them a "photosynthesizing animal". Apparently even taxonomic scientists are not above copping out when necessary.

Culturing euglena can be simple or complicated, depending on who you ask. My initial attempts followed the standard lab procedure (given below) with variable results. Using the standard method and a pure starter culture (via Carolina Biological Supply) my first culture attempt took about 2 months to actually turn green. I had given up on it after a month, and it was only sheer laziness and lack of another starter culture that kept me from washing out the bottle and trying again. It did eventually flourish, however, and I had 2 liters of the greenest water I had ever seen. I used that base culture to experiment with other culturing methods until I arrived at the "fast and loose" method (also outlined below) that I recommend whenever possible.

The standard method of euglena culture

You can find a version of this method in any lab guide, culture guide, or fish book that includes euglena methods. For each liter of "spring water", add 30 grains of wheat, 25 grains of rice, and one level teaspoon of nonfat dry milk. Bring mixture to a rolling boil for 10 minutes, then pour into a sterile container and let stand overnight (uncovered or loosely covered depending on the source). Inoculate with euglena and place in a warm (~70 deg. F), well-lit location. It is usually suggested that you keep the euglena out of direct sunlight, as they will not tolerate rapid increases in temperature when the sun shines directly on the culture bottle. It is also suggested that the culture vessel be deep and made of glass (a gallon jar/jug being ideal).

The fast and loose method of euglena culture!

Suffice it to say the standard method is a royal pain! Most of the time the grain/dry-milk medium went sour on me before the euglena ever really got going - resulting a smelly, gray liquid with a slimy skin on top (even more disgusting than yogurt). So I began looking for an alternative. The answer came to me while visiting Jack Heller's fish room after the St. Louis show last spring. In other words, Jack was kind enough to explain his easy method of culturing green water. The procedure below is a variation on his basic technique.

The basic setup requires a 2-liter bottle, air source, light source, and "MicroAlgae Grow" nutrient solution (available from Florida Aquafarms, or your local WAKO live food guys). Add your starter green water culture to the bottle and fill to about 3/4 full with clean aged water plus 10 drops/liter of the nutrient solution. Set up an airline (do not use and airstone!) to provide a steady stream of large bubbles. Finally place it near a light source (6-12 inches away from a fluorescent tube is ideal) and wait a couple weeks for it to develop into a rich euglena culture. I have had good success without artificial lighting by setting cultures on a shelf in a west facing window. Snails (specifically snail manure) can be of benefit - if you choose to add snails provide a little fresh lettuce for them to eat. My last bit of advice is to shake the culture vigorously on a regular basis (daily to weekly) to encourage the euglena to stay suspended - since the euglena tend to settle out and form sheet like colonies on the bottom of the container.

The question that is undoubtedly on your mind is… Now that I have several liters of green water - what do I use it for? Well it must have some uses, since Killie-geeks line up to pay a buck for a bottle of pond scum at conventions and shows! Aside from the obvious benefits of dying your white T-shirts green, or the prank potential (serve a mug of euglena to your friends on St. Patrick's Day ;-)… it is most useful as a first food for tiny killie fry - especially species like Ps. annulatus, Notho. rachovii, Lepto. minimus, or Simp. magnificus that hatch out so small you need a magnifier to see them. For the first week after hatching feed green water to the fry directly out of the culture bottles with an eyedropper. Very tiny fry can catch and eat euglena easily, and if not eaten immediately, the euglena hang around and consume the nitrogenous excretory products of fry and snails (that is ammonia, nitrites and nitrates). So it is a no-lose situation.

Green water is also an excellent food source for daphnia. I have had great success raising daphnia in culture containers as small as 2-liter bottles using euglena to stimulate growth and reproduction - but that is another story… until next time, keep your peat damp!

Euglena gracilis and its paramylon is manufactured according to current Good Manufacturing Practices (cGMP) - see Figure 6.3). Cultures will be grown in closed bioreactors that are cleaned and sanitized to kill micro-organisms prior to inoculation and growout. Euglena gracilis stock cultures that are maintained in controlled laboratory conditions will be used as inoculum. The Euglena gracilis inoculum is aseptically transferred to the culture vessels (bioreactors) where it is grown in large quantities. Algal cultures will be grown in liquid cultures using agriculture grade fertilizers. At harvest, the finished culture is then dewatered to separate solids (Euglena biomass) from culture media. The resulting paste is then pasteurized to kill the Euglena gracilis and any biological contaminants that may be present. Thereafter, the biomass is dried to NMT 10% moisture and lightly ground to form a powder. This is the first form of the product - a cracked (lysed) Euglena gracilis biomass as a free-flowing powder.

Art / Design / Products using Euglena (or Spirulina) (or others) 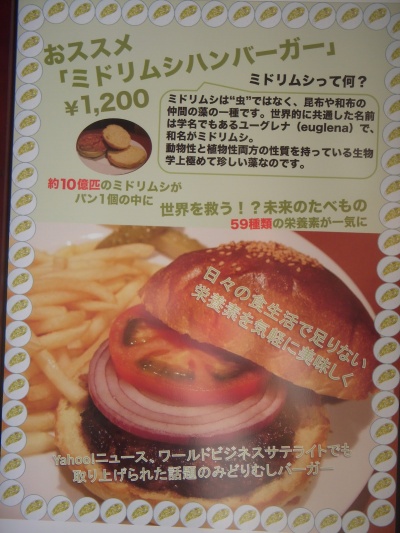 More about Algae Culture at Home