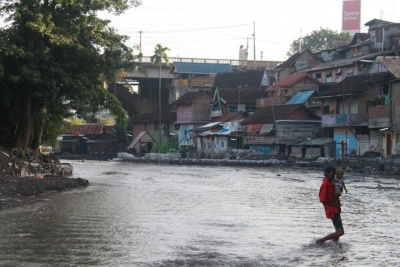 We will kick-off the 2 weeks of HLab2014 by taking a walk along the Code River and mapping existing kerambas.
Another Yogyakarta group Airkami has already started mapping wells around the Code River, and they are working on bioremediation and biosensing as well. We will be making more friends in the area.

The aim is to prototype 2 types of monitoring stations: a static buoy model, inspired by the traditional keramba, and a swimming robot, inspired by aquatic robots and old school toy boats.
We will be building one each (static, swimming) over the course of the HLab2014 period, over a week, with extensive testing and measurement taking by the river next to Lifepatch head quarters.

STATIC STATION: The keramba are traditional anchored fish farms found through the river where currents are slow - we will work with local community members to learn to build a traditional keramba, which will offer fish farming as well as hydroponic plant growth and with a careful choice of plants, some toxin fixation. 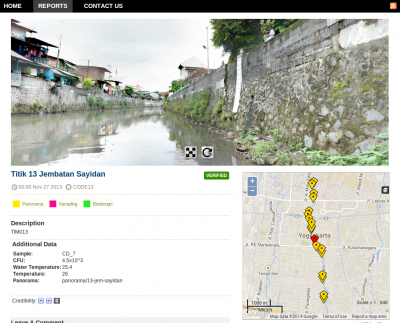 In addition to mapping the existing kerambas, we would like to GPS map the swimming robot location, and possibly directly send the information onto a map.


The Jogjya River Project already has a map started. Airkami has already started mapping wells around the Code River.

Data visualization will remain a challenge - A mapping workshop on how to map data that is fleeting, with the presentation of the Jogjya River Map.

Water sensing is important, however, water purification is also very important.
During the hackterialab, we would also like to collaborate with the Forest Node.

We should also visit the water filteration system built by Airkami.

i would like to start discussing of building some ideas for the research collaboration on the river node in hackterialab 2014. as it is very related to the project (jogja river project = JRP) that lifepatch already conducted for several years, i will tell a bit of a background stories about it.

JRP (http://lifepatch.org/JRP) started from a simple initiative that we, as citizen wanted to explore our own river in the city. for years we have lived in yogyakarta, we never physically been in our own river in the city and basically doesn’t know what’s going on there even though we passed it million times already. so we have an idea in conducting a morning walk on the urban areas of the river, just to explore and see what’s going on. the idea evolved as we built a collaboration with microbiology ugm and cantigi - green tech that we also gather visual documentation and did several water sampling while we exploring the river. we chose e.coli as it’s primarily the first indication of the pollution on the water. we made a fb event and open it for the public. after 3 times of expedition in 3 different rivers of yogyakarta, the activities evolved accordingly with the communities that were involved, such as cleaning the riverbanks area from plastic waste, vegetation mapping etc, however the core of activities which is visual documentation and positioning, also with the e.coli water detection remains as the core of our activities. in 2013 JRP is part of the bio-design for the real world, a collaboration between EPFL, art(sic) bangalore and lifepatch. see more in http://biodesign.cc.

during 2013 we did several activities which you can see in http://lifepatch.org/Jogja_River_Project_2013. the output of the activities is published online, a mapping of e.coli detection and visual documentation. the link is: http://maps.lifepatch.org. 2013 we focus on code river, the main river of yogyakarta. and as donny, our advisor from UGM, guide us, we will focus only on this river for now, which we will take you on the field trip during hackterialab 2014. the plan for 2014 is the dissemination of the result to the communities while also we will investigate further to the headwaters to search for the source where the pollution started.

for the river node, i wo uld like to invite all hackterialab 2014 to collaborate on us with the project wether in developing new strategies, ideas, reach outs accordingly to the issues of citizen science in monitoring the river pollutions. it could be anything, and we’re inviting you to be freely and loosely collaborate with us with of course some framework and structures need to be developed as well. at the moment i’m giving some ideas and thought of my own below.

again it could be anything that relates to the river monitoring. at the moment i’m very interested in flow cytometry and hope some of you have the skills to help us in developing it. i’m very impressed with this: http://www.medgadget.com/2013/04/scientists-convert-a-cell-phone-camera-to-a-fluorescent-microscope.html if somehow we can develop this with the technology available in indonesia, it would be super great!

2. Workshopology and reach out methods

a reach out method such as workshops like http://lifepatch.org/Workshop_Swab_Test_untuk_mengetahui_kandungan_Bakteri_E.coli_pada_telapak_tangan is important. we would like to develop a reach out strategy to explain the issue to the community. Akbar our microbiologist, could you give in some thoughts about this?

it would be great if we could develop some strategy to help out with the sampling gathering as it always quite challenging for the citizen to get this methodology correctly. Timbil, our project leader for JRP might have some thoughts of this? feel free to share.

as you have seen in http://maps.lifepatch.org, our member, programmer, Iyok, have put the results of the 2013 expedition very nicely, combining the 360 photography from Wawies and Joan. I would like to also invite Hackterialab participants to give in some ideas about this.

i think the mentioned above is a good topics to start a discussion. feel free to ask questions and give in some of your ideas to this. we’re very exciting and hoping a fruitful discussions before we enter a physical collaboration next week. 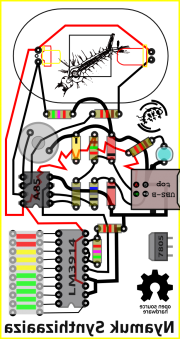