Context & concept: //Description of the project //

BIOSC is an orchestra of biological performers. Each performer is a biological life form performing with electronics, various kinds of microphones, electronic and organic oscillators and many amplifiers. Listen to each sound separately on headphones and listen to the orchestras sound scape thru speakers. BIOSC implements bio(ana)logue systems, an organic process of coexisting living systems and analogue electronic systems. The installation features sound transmitted live as generated in organic/analog system and its emerging into composition.

BIOSC is a collaboration that has emerged from HackteriaLab 2014 and some ongoing research by different members/collaborators. This presentation illustrates the beginning of an ongoing investigation. 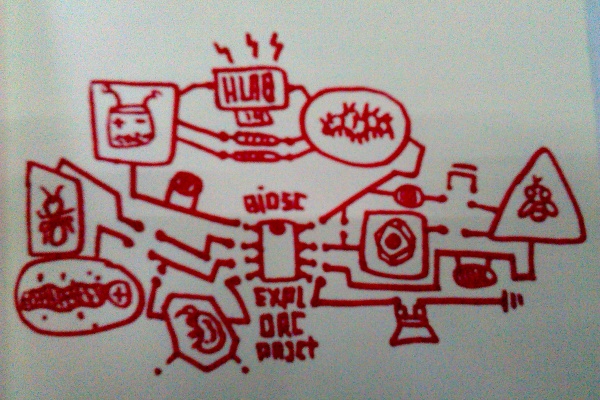 Humanity dominates so much of the natural world. But humans can’t conquer the natural world. In this project we have attempted to amplify natural creatures with technology that has come through the creative exploration of art and science. These technologies are made of both human-made and natural ready-mades.

We have attempted to connect with these natural creatures by exploring and exploiting (which is our natural habit as human beings). With our art/science, we endeavor to become part of these living systems, to visualise, sonify, touch and taste these natural creatures. We do this because we lack a real connection with them. Truthfully, no matter what we do to better understand the natural world, it is still full of mystery and wonder.

How we treat nature as a living creature - having its own spirit, and connection with it’s environment and even ourselves? Our efforts to educate ourselves about the natural world are for what we claim to be ‘a better life’, but whose better life??? These efforts are only in vain, as we are at the top of the food chain, and the main poluter/emitter/dismantler. What about the rest of the natural world, the unseen, the mysterious, always supporting our needs? What can we do for them?

Analogue oscillators exist not just in traditional electronic circuits, but also in nature. This fact has lead us to wonder if it might be possible to build a completely natural electronic synthesiser.

Biologists have been studying natural oscillators for some time, to examine how our natural world functions temporally. For instance, how our hearts beat, where our circadium rhythms are generated from, how the multiple clocks within the hippocampus in the brain allow us to keep track of time or keep a beat, what electrochemical oscillations allow cells to move through flagella-motors, and the list continues.

Part synthetic and part biological, the repressilator system was developed by Elowitz and Leibler [1] to demonstrate a biological oscillation using only the fundamental chemical reactions of a cell.

The system as first proposed was a thought experiment. Could we engineer a cell system where messenger RNA [2] that promotes the production of repressor proteins [3], which in turn represses the production of the mRNA, such that this cell chemistry could lock in to a state of perpetual oscillation? This is what Elowitz and Leibler in their paper "A synthetic oscillatory network of transcriptional regulators", Nature 403, 335-338, 2000.

They demonstrated that in fact this process was possible in two ways - as a mathematical model that demonstrated their reasoning, as well as implemented in the real world through genetically modified E. Coli. The E. Coli respond to the presence of one of the chemicals through a green fluorescence. In a sense, this was biology's first demonstration of a "Flashing LED" circuit.

This system is demonstrated as a sonified mathematical simulation, where interaction with the biological parameters allow the audience to explore the non-linear and unpredictable behaviour of a natural oscillator.

Marc Dusseiller (Dusjagr) has been exploring the sonification of weakly electric fish, such as the Black Ghost Knifefish, (inspired by a project by Anthony Hall called ENKI). This fish is a kind of electrogenic fish which naturally emits frequencies and pulses that they modulate in order to communicate and navigate. These fish are natural oscillars, creating sine wave fequencies that can be amplified.