UNDER COSTRUCTION, PLEASE SEE THIS POST IN RESERVE COPY

I have been a student of art for as long as I remember- different mediums of self expression have engulfed me at different points in time, but largely I have been a performing artist presently studying the visual arts. The varying disciplines often create a conflict and often create solutions to the same self created conflicts as well. To inculcate science within the realms of ethics, aesthetics, philosophy and love, which are all integral to art seems like a direction towards a journey I want to explore. The symbiotic relationships as well as the independence of the elements in nature intrigue me. There is a need to be in sync with nature and using science as a tool to facilitate that process than curbing it's natural creativity is what I hope to achieve.

I was a little apprehensive of where this project and interaction would go, but I am only glad to encounter its strong philosophical backbone integrated with biology. There were some readings that have caught my attention and I have drawn the following understandings from them: -

These sketches are a completely fictional scientific logic of how I would want to create a bacterium called actinodopaine. This bacteria would detect the neuro-transmitter in humans called Dopamine that is secreted while feeling love. Once it detects this it would emit the odour of wet earth as a result of rain. 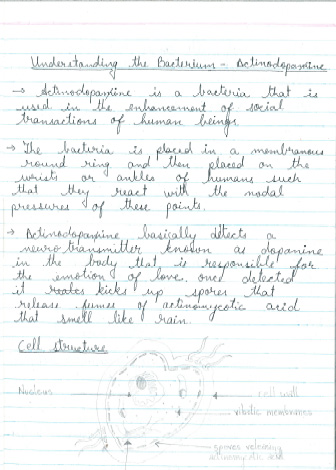 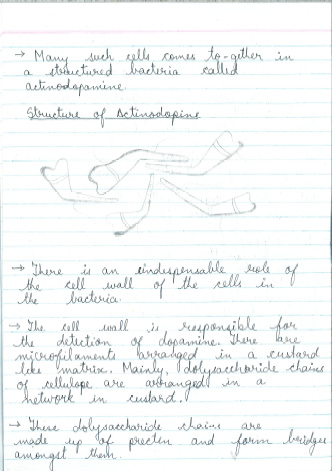 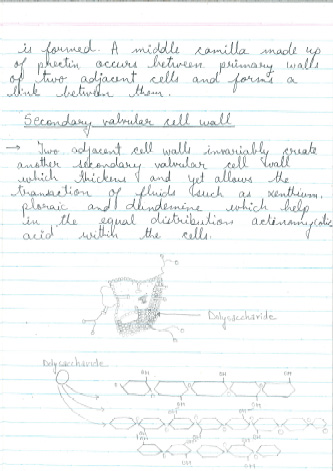 This idea was inspired by a basic instinct of human beings to love and be loved, but very seldom in these fast paced times is there the time or motivation to demonstrate it.

I wonder whether I am tampering with Nature through sheer neglect and ignorance?

There is very little that I know about biology and whenever I come across the terms that ring a bell since high school I get extremely excited. Its a great way to learn and educate oneself, through curosity. But I wonder how far does 'curiosity to learn' justify the ethical reponsibilities that one must undertake while interacting with life.

On the other hand its all beautiful and why not indulge, for doing is a way of thinking, a way of questioning!

When one sees, one believes and that is the principle science works on, today I probably saw why that happens or where scientists come from. It for sure blows your mind away to see in real/experience science and its wonders. Today was the first day spent at National Centre for Biological Sciences (NCBS).

There seem to be possibilities of translating the 'Actinodopaine' into a woking idea. Some notes to understand this better: -

- There was a mention of producing these results in E. Coli through an enzyme.

Here we are trying to 'design' the working of a bacteria on a white board. No matter how absurd it sounds i think it worked. We got some facts right and hopefully will get lots more!

So we have things sorted, in terms of understanding how Geosmin works and the various conditions in which we can get farnysol diphosphate to react with the enzyme so as to create geosmin and the rest needs to be done by Mukund's lab to actually make the enzyme or order it which can take upto 1 months of work, which also means we need to start working on a parallel track that helps us understand some other basics.

We also met Mr. Krishnan today, who seemed like an insightful man, one of those people who look at things from more than one framework. He spoke about a host of things including mutant fruitflies, biophysics,cell membranes,the scope of "art" in science and other intriguing things. but of course it had to trigger other very messy thoughts. Soon after this meeting I felt totally lost and obsolete.

There was no room for dialogue with him, no articulation of what we are trying to do. So my task for the next few days is to articulate what is it that we're doing, we've had extensive discussions about this but yet it seems like I dont know.

In one of my frantic emails to a friend who I know knows the science of words well and I have spoken about this project extensively, I said I needed help in understanding what I am doing. Below written is his reply which I think I should keep going back to:

"You are not clearly not doing an art piece, for if you were you would be viewing the bacteria devoid of it's scientific attributes. You are however applying artistic methods(I think this is where it rests) to scientific matter. One can go on about this, and catch one self in semantic games. At bottom you are giving science-and it's methods a new orientation, a new approach. Perhaps the articulation would require an understanding od methodology. What is this artistic re-orientation of matters concerning science, and what is the difference between art and science. That is where your philosophy comes in. I think you should observe your self. You are your best experiment. See your methods, and compare it the method, you let's say approach a painting you creating or a dance you choreographed."

My bioart presentation- A chicken in a kaliedoscope.

The project essentially raised ethical questions and possibly brought to the forefront the 'murky' grounds we could be entering with our attempt at synthetic biology.

I went over a couple of comments on the CinK piece, (1). it is discussed and argued over, which is a good thing, if nothing else it could be a conversation starter for the much awaited conversation I wanted to be part of (2). It urges me to think and study another discipline totally in detail before i have any further conversations about it. -ETHICS- It seems like its the new big bad word.

I certainly feel ethics are contextual and that certain values get converted into ethics in certain situation and dont in certain others. In a case like that i should be wary of making sweeping statements of what is ethical and what is not.

But I certainly want to question the role of the artist and the role of the scientist. Is it utmostly important that he/she work with organisms and that they woulddn't do so if they could work with metal? Is it mandatory that human beings need to be saved using invasive techniques from carcinogenic waste created by human beings themselves? So then is it mandatory for artist to work with only metal since they'll hurt 'life' while working with chickens? Is expression using whatever it takes to do so unexceptable?

I cant answer any of these questions using the framework of ethics, i dont claim to know them. But I certainly can answer each of these question from a personal insight which is hopefully integrated with sensitivity, honesty and a sense of responsibility.

I seem lost and completely disconnected, I don't know what Bacteria Transformation or any of that is and why anybody should do it, although I am not uninterested, I just need a little bit of help from people around me. Its reaching a mystical stage where the cloak has begun to enter our process.