This project is initiated as part of TAHUN TANAH 2015 (The Earth Year) in Jatiwangi art Factory. 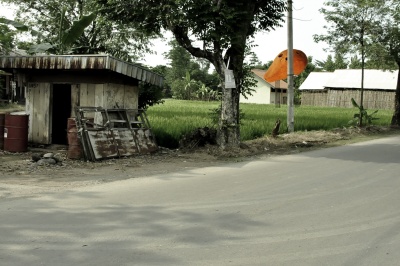 This monument is not a single standing huge alien-like sculpture. This monument is a series of ocarina clay-based sculptures that generate harmonic sound by natural wind installed in several different locations. This monument are made as a landmark for Jatiwangi people who has acknowledged and claimed ceramic-music as their new emerging culture last 2012. Though ocarina is a flute instrument known all over the world, this specific form is found, created and made by the musicians and ceramicists at Jatiwangi art Factory in 2008.

To build each existing item of the monument, we will be using soil from Jatiwangi ground. A modular construction system is necessary in the building process since there will be no kiln big enough to burn the sculpture as big as a house.

How do the sculpture generate sound? 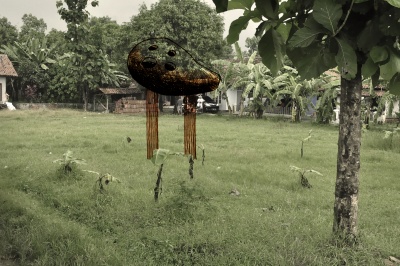 In the holes of the ocarina, we will be installing strings (like a harp instrument) that will generate sound when the wind blows. Meanwhile the building itself will be a resonance to amplify those sounds. Other than being a landmark, the monument is also a soundmark. It marks the sounds of Jatiwangi’s soil/earth/ground/land/clay/mud. Each sculpture/building will be a unique filter to the harmony of natural sound in which it stands. Each building will also generate its’ own types of tunes, be it high or low, soft or loud, depending on the blowing wind. Therefore, the sounds can be a kind of weather forecast.

Will it be like an alien ship landing in Jatiwangi? Definitely no.

The surrounding landscape of Jatiwangi is either used for digging soil for making roof tiles and bricks; but the indigenous people also use it for agricultural purposes. With the latest urban development (a highway is currently being built, a new international airport is planned to be open in 2017), the possible noise created by these entire new environments has many chances in shooing the owls. These sculptures will also be designed as a house/nest for owls. Why owls? Because they are natural predators for rats.

Probable locations to build the monument 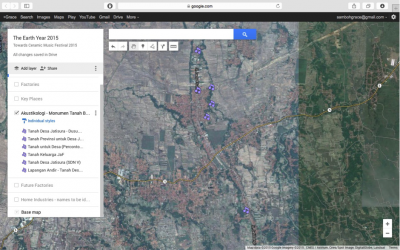 This year marks at least two important things: 110 years of the very first roof tile factory built in Jatiwangi District and 10 years anniversary of Jatiwangi art Factory. Since its inception, Jatiwangi art Factory has been dealing with the these issues from as many perspectives as possible and covering as many layers as it can.

Jatiwangi District is a rural-urban area located in Majalengka Regency, West Java Province, Indonesia. Jatiwangi has been and still the biggest producer of ceramic roof tile in Indonesia. As the center of the biggest ceramic rooftile producer, the people of Jatiwangi have grown into an industrial community. There are a lot of rooftile factories in various villages of Jatiwangi, both traditional and modern factories. This fact makes Jatiwangi seemed to always race with progress and it leaves the peoples always in haste. As the monetary crisis hit in 1997, the rooftile business that is considered as the home-industry collapsed. They have no financial strategy to protect them from the crisis and no protection were given by the government—or even worse, unnoticed by the government.

Jatiwangi District consists of 16 villages, one of which is Jatisura Village—where Jatiwangi art Factory (JaF) is located—that is historically considered as the center of the Jatiwangi. Initially found at the same time as the dying rooftile industry, JaF have always been concerned about the jobless men. It was the rising of female-workers-go-international (TKW) to look for a better income in foreign country. This trend directly influenced the rooftile industry, where most of the female workers left their job and their family, and enable them to pay the bills for the whole family and resulting the man free from their obligation to make money.

A massive development started in Jatiwangi around 2008. Starting from ready-to-wear clothing factories, the ex-sugar-factory turned into a mall, Cisumdawu highway toll (Cileunyi - Sumedang - Dawuan; part of Trans Java line), and the International Airport of Kertajati in Majalengka. Such development has changed the landscape of Jatiwangi. Yet these developments added more and more spectacle for the people of Jatiwangi. To meet the manpower needs of the new factories, migrants from other areas were sucked in, to work and live in Jatiwangi. The men who had been unemployed got a chance to work in the construction of the mall, highway toll, airport, etc.

Where do all these developments begin? As per 2007, ASEAN Economic Community has started a new discourse related to the existing ASEAN Free Trade Area (AFTA) agreement. Initially, AFTA is only applicable for ASEAN countries. The new discourse is heading towards the gradual reduction of duty tax up to zero for 2015 and also open up a new collaboration with other countries out of the ASEAN countries. As per 2010, AFTA signed another agreement cooperating with countries like Australia, New Zealand, China, India, Japan, and South Korea. There are various kinds agreements between ASEAN and those countries, but the whole point of these agreements are easier bureaucracy in terms of documents and zero tax and customs between the countries involved. Indeed the new garment factories that grew in Jatiwangi area are South Korean. With less tax or even zero customs, international airport would be the next step that made sense in terms of facilitating these world-class businesses.

Since 2008, Jatisura village and JaF has been working together to map themself. Seek for various possibilities to build a connection between person of Jatiwangi, its community and people from outside Jatiwangi. Together with JaF, Jatisura village has conducting various community research within their programs like workshops, art projects, and festivals.

Founded on September 27, 2005, JaF is a not-for-profit organization that focuses on discourses of local rural life through arts and cultural activities such as festivals, performances, visual art, music, video, ceramics, exhibitions, artist in residencies, monthly discussion, radio broadcast and education. Since 2008 JaF collaborates with the Jatisura Village Government in doing research and experimentations to connect people using contemporary participatory techniques in the arts.

JaF programs are biannual Residency Festival (JaRF), annual Village Video Festival (VVF) and triannual Ceramic Music Festival (CMF). All of these programs invite art and cultural practitioner from various disciplines and countries to live, interact, work together with the villagers in order to feel the livelihood of Jatiwangi’s rural society. These people are invited to experiment, formulate and create something with the existing society that will later on be presented to many people or, in other words, tested out together.

JaF begin its work with the “addressed public” (in Indonesian bahasa: Publik yang beralamat). There is a tendency that when one uses the term public in their art practices in means that they do not only work with the art public. The term public that was coined by Jurgen Habermass has become a term that points to the non-art public or the society or the community or the citizen or the people. The term “adressed public” coined by one of JaF founders’ Arief Yudi Rahman points to the people that JaF know closely; not just by their demographic facts, but also their names, their relatives, where they went to scholl, where they work and even the addresses of their houses.

Ceramic Music Festival (CMF) is a landmark of the emergence of a new culture in Jatiwangi: Music from clay-based instruments or, simply, ceramic music. A number of bands and ansambles have emerged in the past eight years, such as People Clay and HanyaTerra, that either uses rooftiles or experiments with clay in their instrument-making.

Held by the people of Jatiwangi and JaF, the official opening ceremony of CMF 2012 was marked with more than 1500 people of Jatiwangi beating rooftiles in the Rampak 1001 Perkusi Genteng (1001 Rooftile Percussion Orchestra). (The preparation can be viewed here, the orchestra itself is documented here, and here is a video uploaded by one of the participants in the CMF 2012 opening ceremony.) Involving people from all 16 villages in the Jatiwangi district, the orchestra simply become a movement. Along with JaF and the district government apparatus (district chief, police chief, chiefs of the villages, etc), more than 3000 Jatiwangi people declared the JATIWANGI PLEDGE and sang JATIWANGI HYMN as a collective promise to uphold the Jatiwangi’s culture from time to time. CMF is then decided to become a triennial event of Jatiwangi. It will be hold for the second time in the coming 2015.

The upcoming CMF will be held all throughout the year 2015. We decided to call it THE EARTH YEAR. Having been able to work closely with Jatisura Village Government, JaF has succeeded into establishing a sustainable communication line up to Jatiwangi District Government. By having the trust of the people of Jatiwangi, JaF makes it almost impossible for the local government to not look at them and their activities.

Here is a simple example. In 2012, when they held the first CMF, more than 3000 people attended the festival in the romantic empty land that used to be Pabrik Gula Jatiwangi (Dutch-owned Jatiwangi Sugar Factory). Media exposure was of course an unavoidable aspect. JaF and the people of Jatiwangi collectively generated the contents of CMF 2012, hence the output became JATIWANGI Pledge and Hymn. Later in 2013, the Fukuoka Asian Art Museum invited JaF to participate in an exhibition with the theme art and (social) activism. Other than participating in the form of videoworks, JaF sent one of their members along with the Jatisura Village Chief and also the Jatiwangi District Chief to attend the exhibition opening in Japan. Of course, all expenses were covered by the museum. When the Majalengka Regency Chief learnt that some institution from another country had invited one of his District Chiefs, and even paid his expenses, he had to at least be curious. How is it possible that such thing could happen? So, the Majalengka Regency Chief latter on invited JaF, Jatisura Village Chief and the Jatiwangi District Chief to come and tell him their story and experiences. Since then, the Regency Government has grown more and more respect towards what is being done in Jatisura Village and Jatiwangi District in general. Their voices are now being heard.