Syntheses of "Beyond Black Boxes"

Beyond Black Boxes: Bringing Transparency and Aesthetics Back to Scientific Investigation 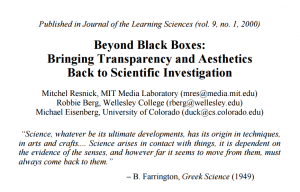 Use of microcontroller (which remains a black box in a way...)