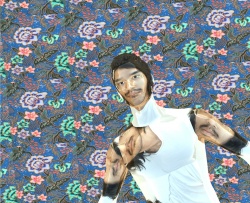 Fairuz’s interdisciplinary practice covers digital and analogue visual formats that have been used as music videos, animation for short films, moving visuals for stage and immersive visual installations. His methods include puppetry, 2D/3D animation and live video mixing. He presented Laksamana Doremix (National Visual Arts Gallery, 2013), a hybrid wayang kulit and multimedia performance based on the famous P. Ramlee film - a continuation of his earlier performance at the Yamaguchi Center for Arts and Media (YCAM) in 2012, where he presented a color tracking shadow puppetry performance.

As a recipient of The Japan Foundation Asia Center Fellowship Program 2015-16, he completed a research project on the usage of media in the performing arts in Japan, shadowing practitioners like Hiroshi Koike, Yoko Ando and YCAM Interlab.

Together with his team at Main Wayang, they staged LAYANG in 2018; a new media theatre performance that fused VR, physical theatre, live music and video. LAYANG was funded with a grant awarded by the INXO Arts Fund.