Fabricating art and science to come to a nano-mach seemed like an immediate goal. As a step forward from igem last year working with ultra-miniture objects/creatures continued. We will be doing our researches on the basics of nanotechnology and give in to the top-down or Feynman's bottom-up approach. Our learning started with Hendrik Schon's scandal. I don't understand my learning from it though.

As a part of a 4 member group our first idea was to create a nanomachine that would attack the bacteria or virus causing an infection in our bodies and the infected person could have a view of the process in the form of a video game. This idea was based on how most patients are clueless about their treatment procedure. So this would (in a way) initiate the enthusiasm to understand the role of an antibiotic in our body.

We took our idea forward and tried bringing it down to a more attainable one(in our heads atleast). The video game anti-biotic treatment has been partially trashed. Now we have a nanochip which when inserted in one's body helps to grow a life tattoo. It has several parts that are all at a nano scale and helps in recording experience that are depicted as a pattern just like in a real tattoo. Only this involves one injection that inserts the chip. The chip has a processor that records from our visual system and our auditory system,the brain waves are picked up by a nano electroencephalograph (e.e.g),the information is read in the binary system so that decoding is comparatively simpler. Also,there are paint-boxes which when triggered release the ink to mark the growth of the tattoo. The mechanism was thought of in order to have a personalized life experience recorder. Initially we had thought of one that would respond to emotions and encode accordingly but realizing that emotions meant measuring hormonal levels brings in a lot of ambiguity as compared to this. Brain waves looked like a surer source to record the experiences. Here are a few slides about our Metattoo chip showing what it would look like and its functioning: 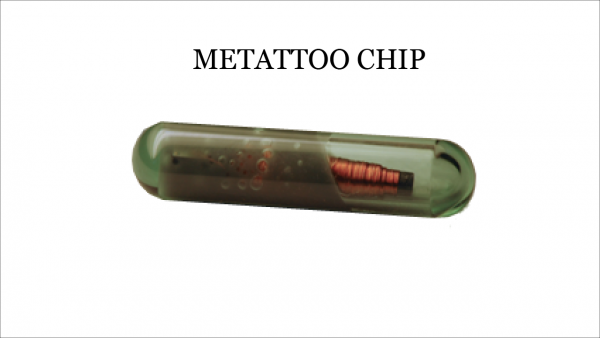 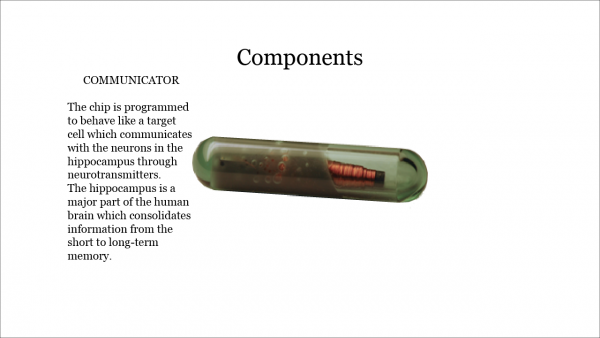 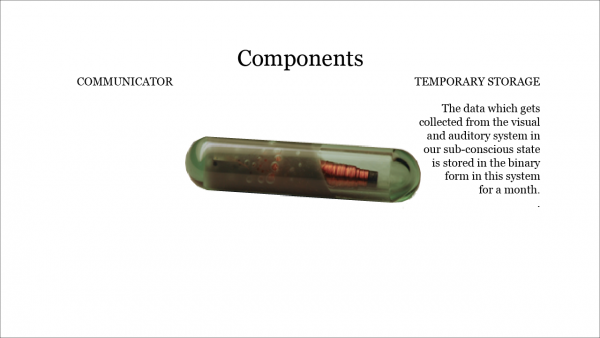 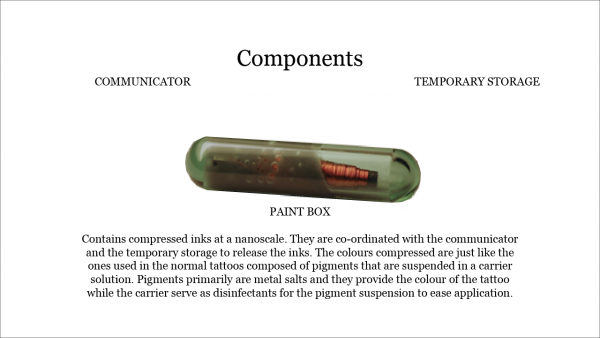 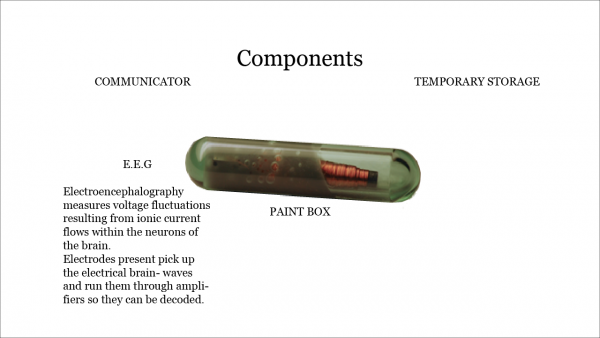 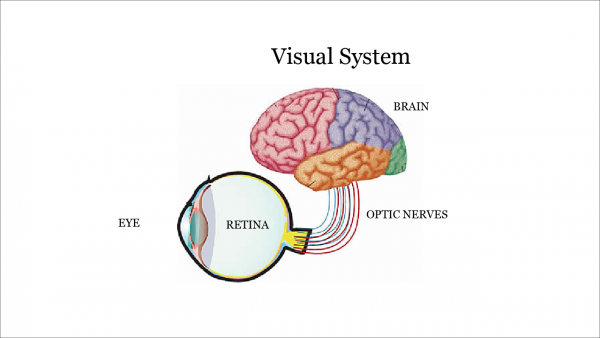 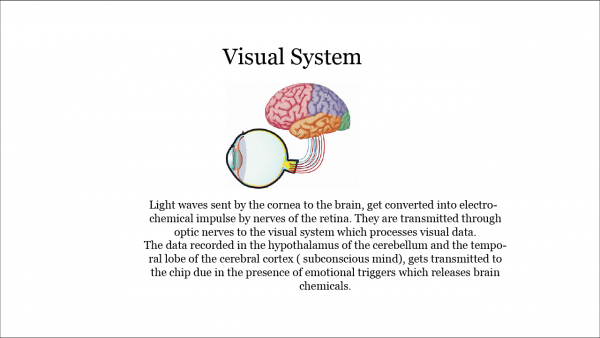 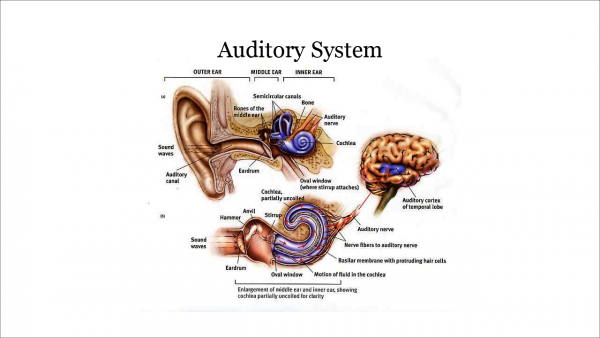 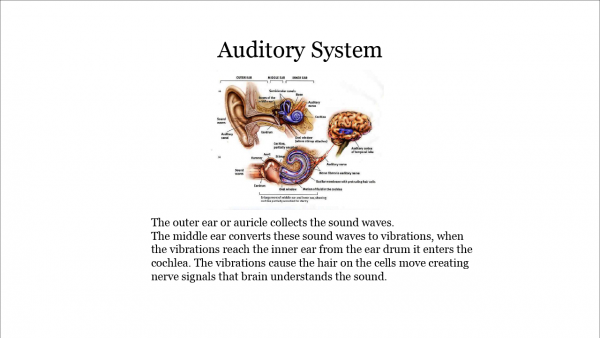 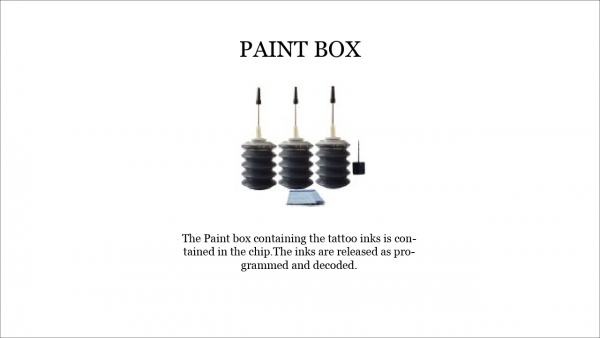 At every step that we exercised our brains we realized the distance that we were going with the feasibility. The other team came up with a straw that had carbon nanotubes in it to function as a portable water filter. Certain studies have been made about it already though.

Shivers: A movie that has been turning our dreams into nightmares. 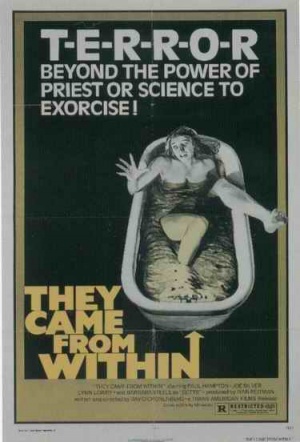 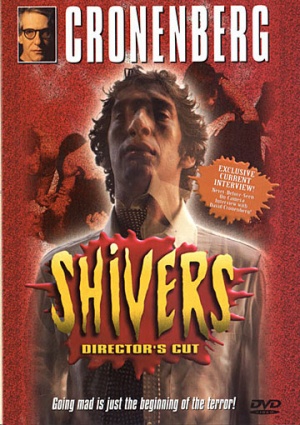 We had to look at 3 things this week the DIY way: Graphene ,Magnetite Crystals and to look at all this - a Scanning Tunneling Microscope. Some resources that we have been looking at : 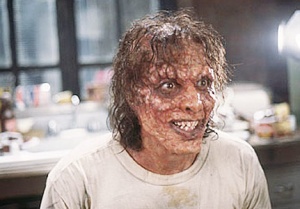 We visited the science museum in Bangalore to have a look at a record of what existed at a tangible state beyond the world of internet. Further we attended a talk at ncbs on biodesign. The lecture was given by a number who spoke about existing robots that have been inspired from living organisms such as the water strider and the gecko. The science behind the water strider robot is based on hydrophobicity and the surface tension of water. The gecko inspired robot has been worked on at Metin Sitti's lab at Carnegie Mellon University. Also we learnt about swarm intelligence.

We continued making our magnetite crystals since the mixture has been taking time to separate into layers. Our guide to it has been: http://opensourcenano.net/projects/project1/

Some pictures from the process:

Some local findings on scales has been on the russian dolls or the Matryoshka dolls.

Further we have been looking at films,books and games that have showed scales in some form.

We attended a talk on the History of Science (in India) by Dr. Indrani Chowdhury; Jahnavi Phalkey and Nasir Tyabji.

What they covered were -

•Scientific culture of an institution.

•How the practice of science in India has been mostly put in a cultural context.

•The different kinds of practices of science- laboratory;pedagogical;industrial etc.

•Evaluation of science - economy of morals

The talk intrigued us on the kind of knowledge that was being shared. Someone from the audience pointed out there was a continual sense of separation between the people who understand the sciences and the public, which I partially did agree to although I don't know if it was meant to be that way. Their initiative looked quite interesting to me- as historians they are documenting the history of science. I think this brings a whole new dimension to the kind of works that have been neglected over the years. Hence bringing in a lot of scope for several unhighlighted innovations to come into being and also recovering old inventions that have been lying in rubbles.

We have been reading a document on Nanoscience and Nanotechnologies:opportunities and uncertainities. It talks about the manufacturing and application process of nanotechnologies;its social and ethical issues; Nanoscience being an interdisciplinary science; the scope of nanotechnology and the risks and hazards involved. Thereby concising the existence of the science.

Mr. Pankaj Sekhsaria gave us a talk on Cultures of Innovation in Nanotech Research.

What he spoke about -

•Indian forms of innovation- is there a pattern? is it Jugaad?

•Stories of laboratories and their details.

We were looking at the Tata Swach Nanotech water purifier and it's functioning. The purifier contains processed rice husk with nano silver particles to purify the water. The properties of silver help kill the bacteria and the nano sized particles help in increasing the surface area so that the bacteria get enough reaction time.

I was looking at typefaces and came across a new typeface that has been made for dyslexics and it's called DYSLEXIE.

My point being- Creating a nano-typeface that could be like a sculpture in the scientific world. I am guessing there exist scientists who have found no hindrance inspite of being dyslexic. So may be create something for them. I am not very sure of the feasibility though. :/