The majority of the team being Art students came to class only with the memory that high school biology provided us. As the class progressed - researching on DNA, E-coli and other experiments, I came to realize that I remembered very little of what I had been taught; though, the class discussions made it seem like hardly anything; most of what I remembered was either misunderstood or too vague. Researching more into Synthetic Biology, I finally came to the conclusion that basically a gene sequence is like a design, mixing different sequences to produce different designs.

We discussed the various elements essential to know for synthetic biology- cells, DNA, genes and proteins and genetic engineering. Durga stumbled upon a video from khan academy.com about DNA, which made things much easier to understand.

We also discussed how we as artists and designers can contribute to science.

1) A bacteria that can change eye colour in the form of eye drops.

2) A bacteria that can change facial expression in the form of gas.

3) A bacteria that can control the genetics of a living organisms off spring.

4) A bacteria that can regenerate cloth.

5) A bacteria that can clean and heal wounds instantly.

We extracted our DNA, and who knew that it was a simple 4 step process:

2) Spit it out into a test tube

4) Add alcohol- running against the edge of the test tube.

Immediately,I found strings of DNA rising to the top of the liquid. It was wicked!!

Later, Yashas asked us to bury it anywhere around campus- apparently it's a ritual scientists do. Weird? No sh*t! But anyway, I took mine into the secret garden, poured it one a bunch of twigs and burnt it. 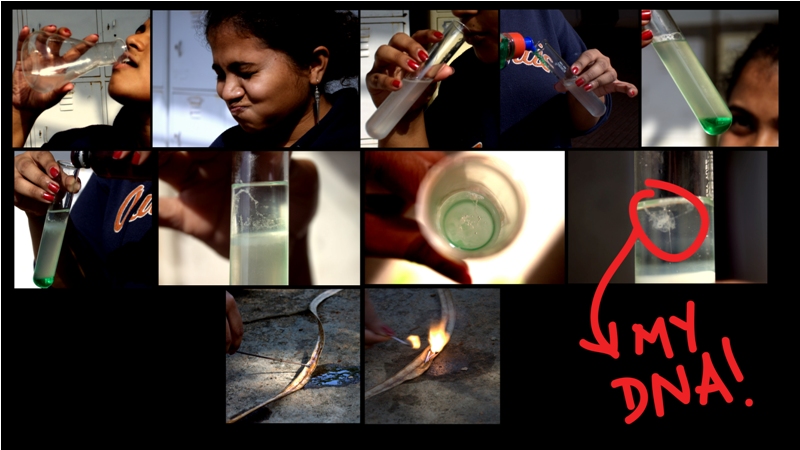 Equipment used in a Micro-Biology lab:

Biswajith (Bissu), Damyanti, Prakrithy and I formed a group and decided to design the Dessicator and the Laminar Air Force.

Who would've though a simple webcam lying at home, would become a microscope! All we had to do is flip the lens of the web cam and TA-DAA!! We had to design a stand to support the microscope coz it wasn't stable on it's own,it didn't have sufficient light nor space to put slides. After brainstorming different designs, Bissu came up with a Lego structured design, which was sturdy and added LED lights to see the sample clearly. 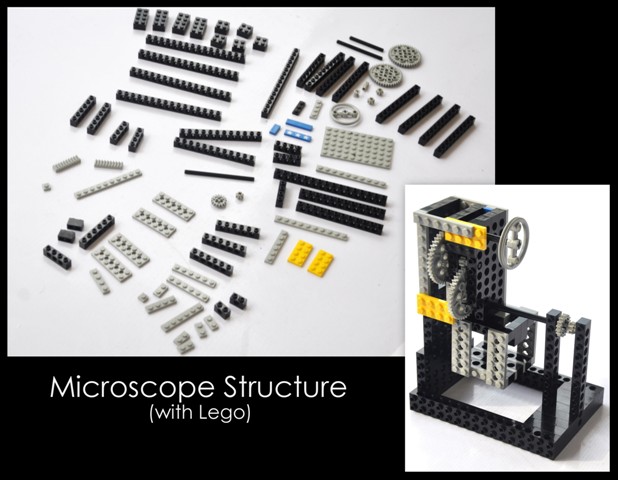 1.What is life according to me?

-Any creature that can breathe, move, reproduce and eventually die.

2.Do you think you have the rights to modify a living thing?

-Every living creature is dependent on another for their survival. Basically, 'modifying a living thing' would hamper with the survival of the creature(s) dependent on the former; so, no I don't think we have the right to modify a living thing.

3.What is design according to you?

-A plan for the construction of an object (in this case organism) to decide upon the look and functioning; typically by making a detailed drawing of it is a design.

After our break, we focused entirely on making the documentation for our microscopes- structure and the actual webcam transformation. It was quite fun,we took a tutorial video for making the webcam a microscope- the bloopers at the end were pretty funny, and a stop motion film for the structure of the microscope.

Mum was in town, so I got her to help me with my bacteria culture. She was a bit horrified at the fact that I was growing bacteria.

3.Cool and allow to set at room temperature.

4. take a clean swab and wipe it against the source where you assume there'll be alot of bacteria - I chose cell phone and kitchen sink

5. Swipe each across the one of the two agar substitutes (make sure it's properly solidified)

6.Leave for a day and watch them grow.

( I will upload pics soon)

Mum called me the other day and asked me how my 'pets' were doing. :) 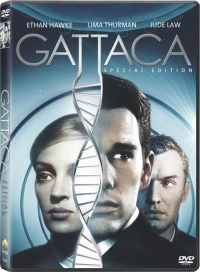 Today we watched 'GATTACA' . WHAT A MOVIE!!! It's basically about the discrimination that exist in the future- genetically engineered world; and how one man changes the his 'predicted' life, and cheats his way into the better life.

Our assignment for the day was to use a part from partsregistry.org and create a form of life. I didn't do it. I had absolutely no idea what was going on, and couldn't really understand the concept of actually "creating" a form of life. So I left it.

We discussed what the others came up with for a new form of life. Some of them were pretty interesting, and some crazy and insane.

Our group had already completed making our microscope, except for a stable lighting source. We finally decided on fairy lights, combined with a 9 volt square battery and a battery holder. The rest of the day, we spent time working on the documentation of the making of the microscope.

Class was cancelled today; so Prakrithy and spent the day designing the Desiccator. 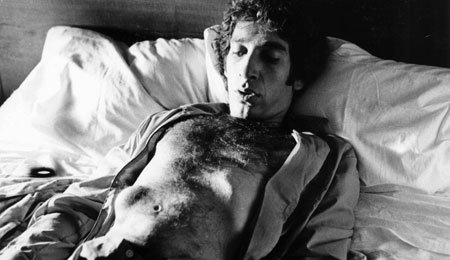 We watched Shivers today, a movie directed by David Cronenberg about a doctor’s attempt to bring out the inner sexual animal in man, using a parasite. He fooled his co-workers, and sponsors, into thinking that he was working on creating an alternative to organ transplant, by using parasites. The doctor was unable to accurately predict what the modified parasite would do. This lead to the parasite spreading from his teenaged mistress to quite a few other residents of a “sterile” high-end apartment block, and spreading uncontrollable sexual desire. This movie, to me, highlighted the unpredictable nature of the effects, the consequences of any modifications that we make in any organisms. It also highlights the unpredictability of the behaviour of the organisms. The behaviour of the modified organism in the laboratory is not adequate enough to predict its behaviour in the outside (real) world. The parasites modified an entire society and, in a manner, the entire purpose of a community.

By far, one of the top 10 grossest movies I've ever seen. *shrugs*

Today, we started the day by watching an interview of David Cronenberg. He spoke about issues he'd faced as a result of filming Shivers. We also watched an interview of the famous physicist, Richard Feynman. He spoke of the necessity for us to understand that by knowing the name of something, we do not actually know it. His view on how the world works was quite interesting, but I do not find it as something I necessarily need to agree or disagree with. Everyone is entitled to their views, and that doesn't give anyone else the rights to credit or discredit them. We also watched a few videos on the basis of life, and genetics. The videos also spoke about the history of genetics, and the principles of inheritance, as stated by Mendel.

Another important thought that came to mind today was the right of humans to modify organisms. I had earlier said, "Every living organism has the right to choose how it lives. That in a way, denies us the right to choose how it lives by modifying it. But in a way, nature itself modifies it’s organisms, and if nature has the right, we should also be given the rights." Nature's modifications occur over millions of years. It's consequences have been experienced in smaller magnitudes over time. But would it be the same when we drastically cause changes, that have been happening over millions of years, in a matter of days or months? Again, the predictability of the consequences of these changes comes into question. Will their magnitudes be bearable? As of today, only God knows!

Cells are the very basis of life, and the basis of a cell, is its DNA. It was this we studied today. DNA. We studied mainly by watching videos. We first saw a video on genes and how they are linked to chromosomes, how characters transferred from parent to progeny through their genes. The next video was about the discovery of DNA, its structure, and how it was accepted as the genetic material. The third and last video was about circumstantial and experiential evidence for DNA being accepted, among the scientific community, as the genetic material.

Prakrithy and I came up with a whole lot of designs for the desiccator. A desiccator is meant to keep chemicals free from moisture. Since we needed an airtight container with two chambers (one for the chemical containers, and the other for the desiccant) allowing the passage of air between the two chambers, Prakrithy thought that the design of a traditional Indian coffee filter was perfect, and that we could come up with a design similar to the same - big enough to fill at least 10 beakers.